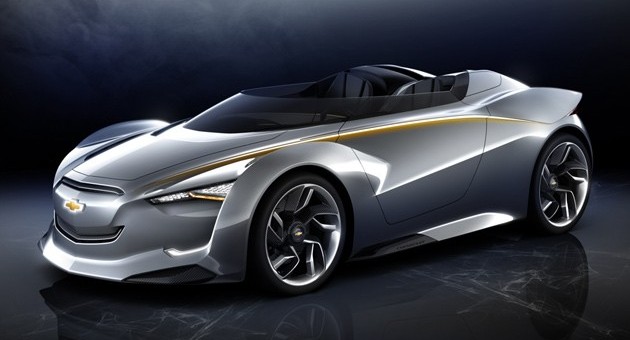 What is likely to impress onlookers at this week’s Seoul Motor Show in Korea, Chevrolet looks to be the talk of the town with the gorgeously-striking Mi-Ray (Korean for “future”) Concept, a mid-engined compact sport hybrid roadster capable of allowing its driver to switch between rear- and front-wheel-drive on a whim.

The Mi-Ray is powered by a small 1.5L turbocharged four cylinder engine mounted behind the cabin accompanied by a pair of 15-kilowatt electric motors mounted in front of the cabin connected to a dual-clutch transmission. And as noted before, the power can be sent to either the front or rear wheels, which utilize regenerative braking to help charge the batteries back up.

All of the mechanics are covered by the Mi-Ray’s fantastic carbon-fiber shell decorated by a streak of yellow ambient lighting resonating from the underbody. The rear fenders each feature a storage compartment while present in the front is the traditional Chevy twin-port style grille and Corvette Stingray Concept-esque headlamps.

The interior is a dual-cockpit setup, featuring a high center console with a minimalist design and leather seats. New-tech features include fully retractible rearview cameras, a forward-facing camera that works with the Mi-Ray’s GPS system to overlay navigation with real-time video, and a back-projected screen that displays all the necessary info its driver should know.

If you needed to hear it again, the car looks fantastic. But with all of these international unveilings for Chevrolet, what’s going to be left for New York?