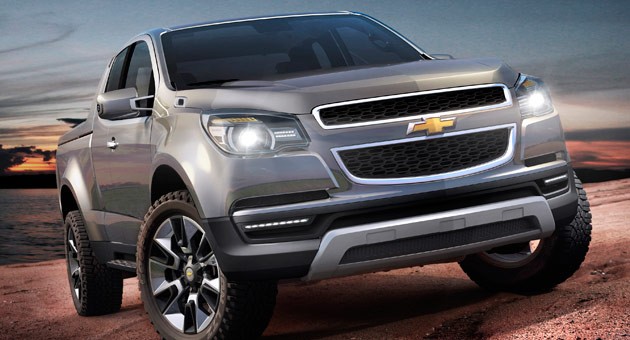 In with the new.

The life of the stagnant, current generation Chevy Colorado and GMC Canyon are beginning to come to an end with the unveiling of the next generation Colorado, which will be on display during the 2011 Bangkok International Motor Show in Thailand.

GM seems to have chosen the Bangkok International Auto Show to unveil its new small truck because Thailand is the world’s largest market for mid-sized pickups, according to Susan Docherty, who is currently GM International Operations vice president of sales, marketing and aftersales.

The next generation Colorado will in fact be built in Thailand and will be sold all over the wold except the United States and Canada. Reasons being for this decision is because the U.S. and Canada-bound Colorado is going to be “slightly different” than the global model, which could mean a lot of different things, but most likely will be different in America the same way the American Chevy Cruze is different than the global model with its different choice of engines, transmissions and options, among other things.

It should also be noted that GM is supposed to be building their American Colorado/Canyon replacement in the U.S.A., either in Shreveport, LA (where the outgoing model is currently being built) or perhaps Wentzville, MO.

Under the hood of the showcar is an all-new 2.8L turbodiesel I-4 engine that has been developed in-house by GM which sends an undisclosed amount of power to all four wheels. The 2.8L displacement also makes the engine larger than the Ford T6 Ranger’s 2.2L four cylinder diesel engine, and therefore we should see more power coming from the Chevy.

While the fancy lights, mirrors, body-color tonneau cover and intricate 20″ wheels are most likely not going to make the final cut, we expect the rest of the truck will. The futuristic interior could be a toss-up.