Perusing the web while burning the midnight oil during last night’s windy Colorado cacophony, I came across not one but two Google text ads for the newest addition to the Buick family — the Verano.

The two ads have different titles, with the first reading “Buick Verano Unveiled” while the other promoting the “Verano Official Site”. One of the ads, in fact, was even seen on GM Authority’s own ad space and both promotions have the same description that reads:

“Get Updates on the Verano: Buick’s Compact Luxury Sedan of the Future.”

Both ads — if clicked — take the user to the Verano landing page here, which doesn’t have much about the Delta II-based sedan — only offering eight (not-so-high-res) pictures, a brief vehicle description, and links to post one’s reaction (on Buick’s Facebook page), read the unveiling press release, and request more information.

To see the ads for yourself, just do a Google search for Buick Verano. You may even see a Google ad for the Verano on GM Authority while reading this article! Don’t worry, we don’t’ control the ads on the site.

The Verano, which will be assembled at GM’s Orion Township plant in Michigan, will arrive in dealer showrooms in the fourth quarter of this year — so it’s exciting to see Buick already building buzz and interest in the compact model carrying an all-new nameplate.

Of note is the ad copy, which forgoes the “premium” vocable that’s been used on many a Buick today (and with which yours truly vehemently disagrees), instead opting to call the Verano a “compact luxury sedan.” Personally, I hope that this marks a transition in the way GM markets and strategizes about the Buick brand — moving the Tri Shield into the “pure luxury” space to compete head-on with Lexus (leaving Cadillac to go after BMW, Audi, and Mercedes-Benz in performance luxury). But maybe I shouldn’t hold my breath… 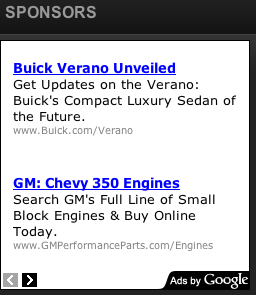