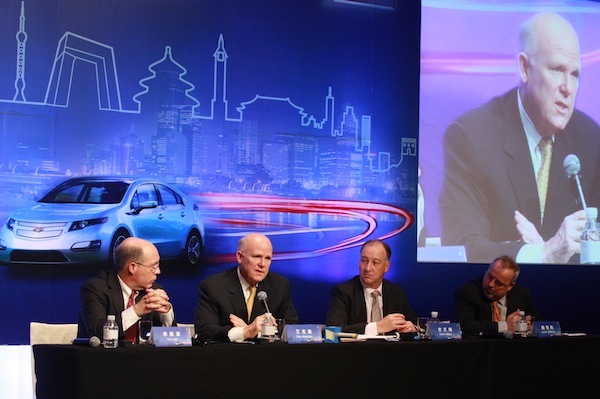 2,350,000 million. That’s the amount of vehicles GM and its joint ventures have sold in China during 2010 — making China the single largest national market for The General (by volume). But GM isn’t about to let off the gas — as evidenced by comments made by Chairman and CEO Dan Akerson during a recent media briefing in Beijing. Here are some of his statements during the event:

“As our largest market, China played a significant role in GM’s success in 2010. We will continue investing aggressively in China to ensure the long-term success of our company.

According to Akerson, “GM’s success in China is the result of our strategic approach to doing business in this country. The foundation is great product, a consistent focus on understanding and meeting the needs of local consumers, fantastic partnerships, and a dedication to bringing the latest industry technology to China.”

“GM will continue to make China one of our priorities,” said Akerson. “We plan to introduce more than 20 new and upgraded models over the next two years, strengthen our local product development capability, expand our cooperation and sharing of technology with local partners, and lead in the introduction of new energy vehicles including the Chevrolet Volt extended-range electric vehicle. All of this is part of GM’s long-term commitment to the sustainable development of China’s automotive industry.”

Akerson further reinforced the importance of GM’s local relationships: “We regard our 11 domestic joint ventures as 11 keys to our success in China,” he said. “To remain a global industry leader, GM must remain an industry leader in China.”

China is about as lucrative an automotive market as the surface of I-95 on a scorching-hot Miami summer day. That is to say that General Motors would be foolish to not compete aggressively in China. However, it’s important to keep in mind that GM’s success in the country comes in no small part from its wide array of relationships and joint ventures, some of which have resulted in major technology sharing with Chinese automakers — most of which are severely lagging behind those in America, Europe, Japan, and Korea. So let’s hope that this tech carry-over disguised as technology sharing (and joint ventures) doesn’t come to bite General Motors (and other already-established automakers) in the arse.