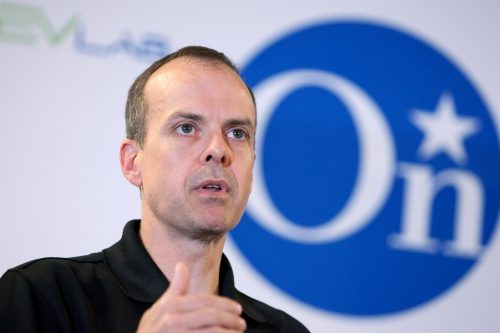 Those who “think” they know me often state that I am extremely opinionated. Well, opinionated I am — and I wish more Americans spoke their minds. I pride myself on being very honest in my opinions since we live in a world where the “no spin zone” is nothing but. And while I typically don’t like to write about the performance of GM’s senior management, today I am going to bend my own rules to discuss the performance of OnStar President, Chris Preuss.

Most senior managers of large corporations have a difficult decision at hand when filling key positions. It’s difficult for a number of reasons but one of them is trying to find a candidate who not only fully understands the direction in which the corporation wishes to grow but who also brings to the table a unique perspective that can be used to take the initiatives that have been started and move them forward. To that point, Mark Reuss (pronounced Royce) has done a wonderful job in selecting Chris Preuss (pronounced Pruce) as OnStar President.

In the short time that Preuss has taken over the reigns at OnStar, he has taken the technology used to support the telematics firm’s safety features and expanded it by leaps and bounds to include features that provide increased convenience to the public. For example, check out the videos at the end of this article. These OnStar videos give viewers a great understanding about the ways in which information and functionality can be enhanced between you — the driver — and your car. In addition, future OnStar features will allow users to send and receive email, Facebook, Twitter and text messages — which, although controversial, is a welcome feature. Personally, I would gladly buy GM’s heads up display option (HUD) if I could use it to flash one-line text instead of using it to see my car’s speed or engine RPM, as the feature currently provides. At the end of the day, I am way too busy as it is — getting information as quickly as possible is vital to me and my business interests.

You Ain’t Seen Nothin’ Yet…

Other new OnStar developments include offering the service to non-GM customers as well as owners of GM vehicles whose cars have not left the factory as OnStar “ready”. This will undoubtedly not only increase the revenue stream for OnStar but also widen its R&D possibilities by entering a new market segment. The result of OnStar’s business development in such a short period of time has turned the service from a safety feature completely dependent on current General Motors customers to a safety and communications product available to the automotive market at large. I could go on and on here in what this positive direction means for the corporation, but it’s safe to say “you ain’t seen nothin’ yet”.

Social Is The (New) Reality

Chris has a long history in communication: in fact, before taking the reigns at OnStar, he was General Motors Vice President of Global Communications. In that role, he was largely responsible for getting General Motors out of the dark ages of communication and into social media — the reality of today’s communication between consumers. Believe me when I say that was no easy task. It’s quite common to see some of GM’s key product personnel taking to the “net” through Twitter, Facebook, LinkedIn and 100’s of enthusiast sites and forums. The reality of global communications today and — in particular the Internet — is that people are rapidly moving in the direction of non verbal communication. Their preference for this type of communication is based on factors such as cost, speed, convenience, the ability to interact anonymously, as well as the general love of knowledge and the ability to reference old communication that a traditional phone call simply can’t provide (Google Voice aside, of course).

The Internet has forced businesses to rethink how the consumer interacts with one another as well as how information is disseminated, often at viral speeds. Internet forums have now replaced “Town Hall Meetings” and web messaging and blogs allow one person to instantly communicate with as big an audience as desired. As such, it’s clear that Chris Preuss saw the future and proceeded to perfectly deliver on GM communication strategy, leaving those that followed him a wonderful canvas to work from.

The one common thread in both these positions is communication — and to that point — Chris has that experience in spades. What impresses me most about him, however, is not his strength in communications but — more importantly — his ability to take what is given to him (successful but dated) and turn it into a major industry game change. This kind of behavior is rare in an executive. Often, executives play the “safe card” or manage the initiatives set by their predecissors. Preuss’ success has proven that he is willing to not only take risk, but be open to new ideas brought to him by the good GM people that you never hear about such as Mary Henige and Nick Festa.

General Motors will do well with executives such as Chris, who turn water into wine.