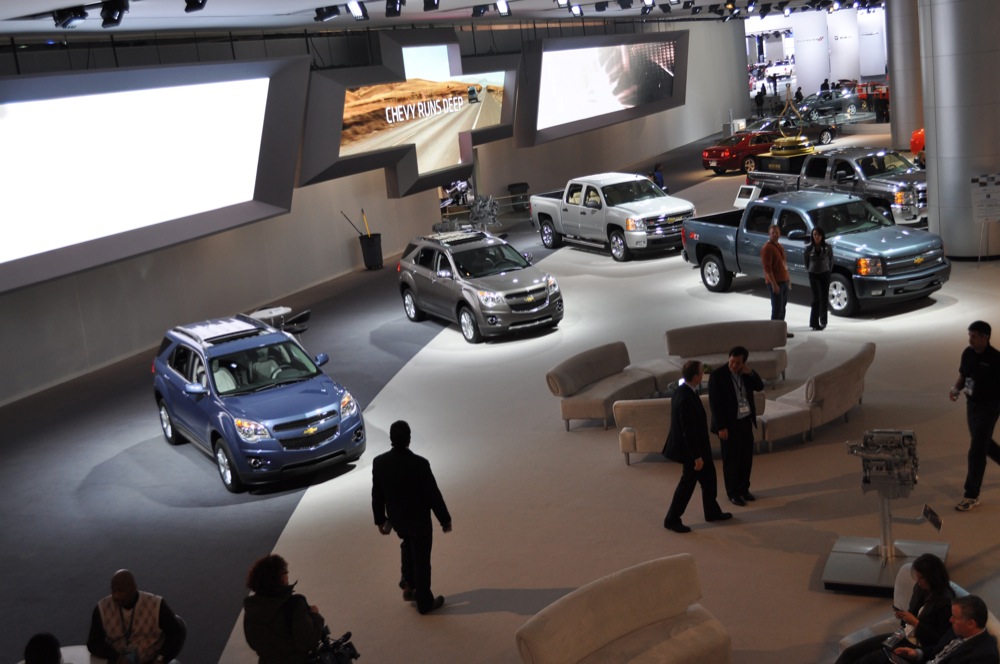 After hours upon hours of walking, photographing and socializing coupled with lack of food and sleep over a span of two days — we attended our first-ever major auto show as official press. Go us!

Now as we rest our feet and apply Gold Bond to all necessary areas, we leave you with our cumulative grade-sheet of how well The General’s four brands fared during the 2011 North American International Auto Show. On that note, we will have to shelve the piece about how we snuck into a major auto show for a later date.

It’s easy to immediately see GM had a higher budget for the show than previous years when glancing at the enormous screen that takes the shape of Chevy’s logo from their second-level platform providing a second-story view of GM’s entire showroom floor. There is much more to see and do at this year’s exhibit, with just about everything The Bowtie sells under the American Sun on display (including multiple Volts and the new Camaro Convertible), as well as plenty of activities to entertain visitors such as racing the Chevrolet Cruze and Volt via Microsoft’s Xbox Kinect. Chevrolet also hosted a press conference, unveiling the Chevrolet Sonic Z-Spec Concept, Sonic Hatch and the Sonic Sedan with keynote speakers being GM North America President Mark Reuss and CEO Dan Akerson. After Akerson was finished speaking, he invited everyone to stay and celebrate Chevy’s centennial year with hamburgers and beers. It was quite fun, and left us wondering if The General will be able to top NAIAS at the Chicago Auto Show that’s just around the corner.

What we didn’t understand: the lack of focus on the Chevrolet Cruze. It still needs momentum if GM plans to ever beat the Toyota Corolla and Honda Civic. And with Ford hyping up its 2012 Ford Focus, Chevy needs to kick it into high gear.

With the Buick Lucerne unnoticeably (if that’s a word) absent, the Tri-Shield hosted a press conference that finally showed off the Verano, an all-new Delta-based compact that Buick boasts to be the quietest sedan in its class when it goes on sale during the tail end of this year. Also on rotating displays were the 2012 Regal GS and 2012 LaCrosse with eAssist.

We liked: the ambiance of a laid-back lounge in the middle of a chaotic auto show.

What’s unchanged: the exhibit is nearly the exact same set up as last year.

Keep a future eye out for: the rumored “baby Enclave“, something with a plug-in powerplant — though they could end up being the same vehicle.

Though Cadillac had an impressive display with lots of glossy aesthetics, it felt repetitive. One reason could be that just about every car on the floor was a variant of the CTS with the exception of an SRX and an Escalade thrown in to mix things up a little. However, staring at the entire CTS-V line never got old.

What lead to gluttony: the absolutely amazing parfaits and other treats Cadillac was generous enough to treat the press with.

It’s getting old: the acclaimed Cadillac CTS series is approaching its fourth year, with practically no upgrades aside from the addition of wagon and coupe variants.

A future auto show will feature: a plug-in SRX, an ATS “concept”.

While Ford and Ram were showing off some impressive trucks, and Chevy was touting its 2011 Motor Trend Truck of the Year award, the GMC Sierra All Terrain HD Concept seemed to steal the fire from anything at the show with an open cargo bed. However, we would like to see more originality from Big Red in terms of current product. The Yukon (as well as the Chevy Suburban) seem to be on the neglected side.

Do not touch: the electronic running boards on the GMC Sierra All Terrain HD Concept.

We would like to see: a Yukon All Terrain HD Concept.