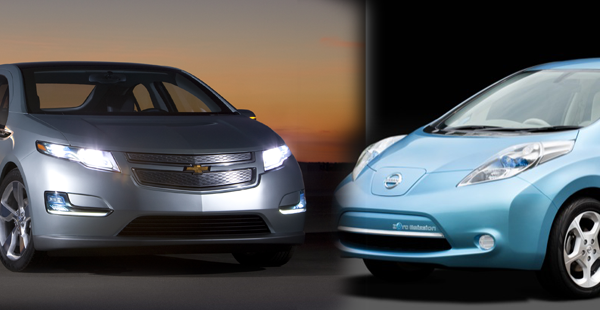 Months before the Chevrolet Volt was even on sale it had an intense rival in the Nissan Leaf. Despite  the Leaf being significantly different from the Volt as far as electric cars go, it is the only other electrically driven plug-in vehicle available on the market from a mainstream manufacturer. This common classification created the rivalry long before the vehicles were available for sale in the fourth quarter of 2010. Despite the amount of media attention each car brought their respective manufacturers before launch, the real debate was which one would succeed at sales over time.

Now, after the first full month of sales for each vehicle, we can begin to answer this question. GM-Volt.com reports that the Associated Press got ahold of December sales figures telling that GM moved between 250 and 350 Volts while Nissan sold only 10 Leafs (Leaves?). This seems that the Chevrolet Volt has won the battle, but the war is just beginning.

Though the numbers play to The General’s favor, the figures are slightly skewed. Neither vehicle is currently available in every state, but the Volt is still more widely available than the Leaf. Nissan is limiting Leaf sales to warmer, southern states to avoid reports of low EV ranges from immediately exposing the Leaf to cold, northern temperatures. This poses extra cause for concern for Nissan with the electric-only Leaf, which does not have a gas engine to fall back on like the Volt. However, range anxiety for the Leaf may strike any owner, regardless of climate because of the Leaf’s dependence on electricity. The Volt, on the other hand, always has the range-extending gas engine to fall back on.

The same Associated Press report suggests that the deal to lease the Volt at a relatively low $350/month may end sometime soon. GM-Volt reports that they had this rumor first but that GM is not committing to ending the lease deal. The most specific GM could get was that the lease would “extend into 2011 CY.” Thinking goes that this lease deal existed to allow early adopters access to a car whose sticker price they really couldn’t afford. Now that these zealous Volt fans have their vehicles the General is apparently mulling ending the low priced-access point.

In an interesting conclusion, GM-Volt reports that according to their own research purchasing the car is a better option anyways and their readers seem to agree, 44% saying they planned to purchase a Volt versus leasing one.