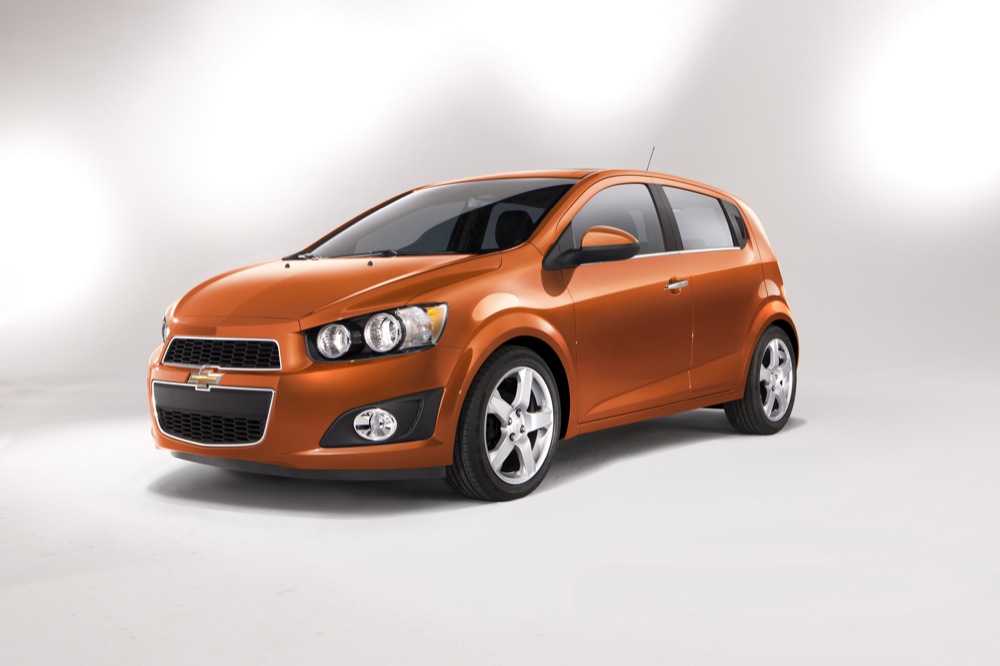 The most we’ve known about the next-generation Chevy Aveo is that it will carry the Sonic moniker, ditching the Aveo nameplate for the North American market… until now. Chevy just pulled the wraps off the all-new Aveo Sonic hours before its press conference at the North American International Auto Show — and boy is it all that… with a pile of pancakes.

The Chevrolet subcompact, which rides on GM’s global Gamma II architecture and is scheduled to begin production in the summer of 2011 at Lake Orion Assembly Plant in Michigan, will be available in hatchback and sedan form. The five-door hatch carries over the styling of the Aveo RS Concept (shown exactly a year ago at NAIAS) while the sedan definitely looks a lot better than the “shoot, we have to make a sedan too?” variant of the industry-darling Ford Fiesta. In fact, Chevy’s press release points out that the two variants look “distinctively different” — with the five door carrying a two-box shape with aggressive, diving feature lines whilst the sedan provides a “notchback” profile and has a more upscale and mature presence. The hatch even looks like it only has three-doors by concealing the door handles of the rear portals in the C-pillar while delivering details never before seen on a subcompact vehicle — including exposed, motorcycle-inspired rear taillamps.

The Sonic will offer the same familiar powertrains as seen in the Chevy Cruze, only in a smaller and lighter package: the 1.8 liter ECOTEC (135 horsepower, 125 lb.-ft. of torque) paired with a either a five-speed manual or a six-speed automatic and the 1.4 liter turbocharged ECOTEC (138 horses, 148 lb.-ft. of torque, pro code LUJ) mated with a six-speed manual gearbox. For those keeping track, the turbocharged engine offers 18 horsepower more than the Ford Fiesta.

Inside, the Sonic rings true to the Aveo RS Concept — with a unique instrument cluster featuring a large, round analog tachometer set within an asymmetrical LCD readout accompanied by a large digital speedometer display. The front seats are buckets with available heating while the rear seats fold flat for lugging larger items.

As far as driving dynamics are concerned, Chevy made it a point (multiple times) to tell us that the Sonic “brings agility and a fun-to-drive feel that is rare in the segment.” The bow tie brand even asked Corvette engineers to tune the ride and handling of the Sonic, “giving it a more direct and athletic feel, while balancing the vehicle for the broad range of driving conditions in North America.”

“Sonic’s body structure is designed to be one of the stiffest in the segment. Its rigidity enabled engineers to tune the ride and handling more precisely. Sonic’s unique “flat top frame” cradle, for example, assures optimal stiffness in the front chassis portion of the vehicle. The rear axle is essentially a straight axle without contour for packaging restraints and reduced noise, vibration and harshness,” reads GM’s presser.

Interestingly, GM’s press release made no mention of a performance-oriented version, but we were able to find some images on The General’s media website titled Sonic Z-Spec Concept. Looks like we’ll have to wait for Chevy’s NAIAS press conference tomorrow to find out what that’s all about.