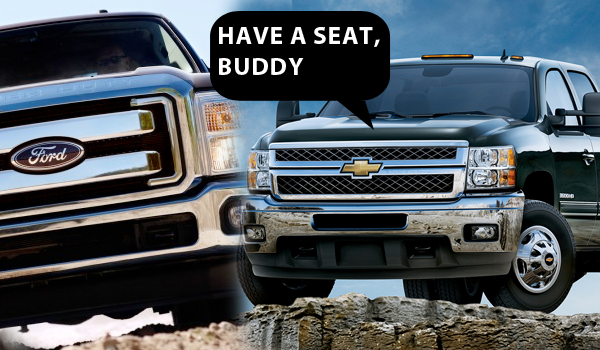 General Motors has never been awarded two of Motor Trend’s most esteemed awards for the same model year. That dry spell ended today when Motor Trend Editor-In-Chief Angus MacKenzie announced the 2011 Chevrolet Silverado HD as the publication’s 2011 North American Truck of the Year during the Army/Navy football game, complimenting the 2011 North American Car of the Year award given to the evolutionary Chevrolet Volt.

What ended up stealing the victory from the Ford Super Duty in the end was the engineering. With the Silverado (and GMC Sierra), Motor Trend noted the HD’s more superior power-to-weight ratio, better handling and suspension, greater passing power and 0-60 times (both laden and unladen), and a finer 60-0 braking distance (also both laden and unladen) compared to the Ford Super Duty.

However, the Silverado HD didnt win any battles in the unleaded front. Its long-in-tooth 6.0L Vortec V8, producing 300 hp and 360 lb-ft. of torque, ended up being smacked around by The Blue Oval’s V8 offering that produces 385 hp and 405 lb-ft. of torque. But considering gasoline engines make up such a minute percentage of heavy duty sales, it didn’t account for much.

Additionally, even though Ford had the bigger numbers on paper for the diesel category – with 400 hp and 800 lb-ft. of torque thanks to its all-new 6.7L Power Stroke, compared to The General’s 10-year-old 6.6L Duramax Diesel which provides 395 hp and 765 lb-ft. – it clearly didn’t count for much, as also witnessed by PickupTrucks.com in their latest heavy duty towing test. Despite the numbers, Chevrolet blew the doors off the Ford in each real-world comparison test to date.

So hats off to all of those involved in The General’s Heavy Duty truck program, from its marketing department to the workers assembling it, but especially the engineers, who have once again proven that they are an elite group. Max and Al must be proud.