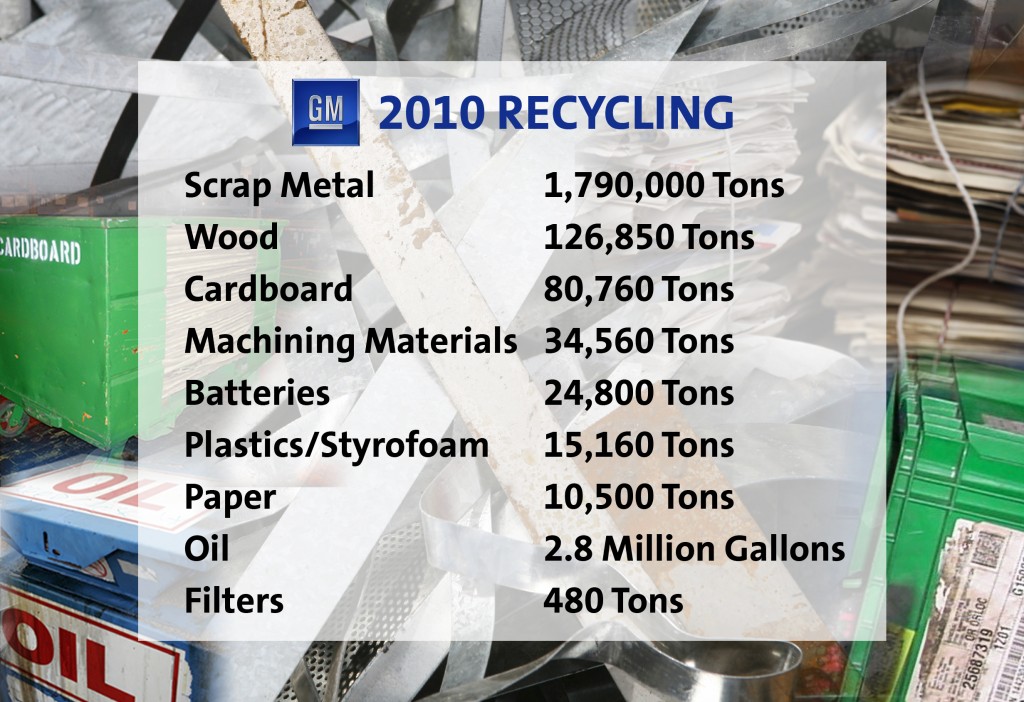 If there is one thing environmentalists love to bash, it’s the auto industry. They complain about how much vehicles pollute, how noisy they are, their emissions — the list goes on. Though they must not have heard that the automobile is the most recycled consumer product in the world. And regarding General Motors,  environmentalists should quiet down a bit when talking about GM as the company announced this past week announced that 76 of its 145 facilities are landfill-free. That means the waste generated from the plants are reused, recycled or converted to energy.

“We’re committed to reducing our environmental impact. Whether it’s a facility that’s already achieved landfill-free status or one of the many that are nearly there, every site is serious about finding ways to reduce and reuse waste,” said Mike Robinson, vice president of Environment, Energy and Safety Policy at GM.

In total there are 76 landfill-free facilities has more than 97% of waste recycled or reused. And so far this year, 2.5 million tons of waste has either been recycled or reused at GM facilities, preventing an estimated 8.4 million metric tons of carbon dioxide equivalent (CO2e) emissions from entering the atmosphere. The remaining 3% of waste is used to generate energy for the facility, thus reducing the amount of fossil fuels used to create energy.

“When you think of what it would take for a family of four to not produce any trash for a year, that’s quite a task. This is 76 sites around the world and about 70,000 employees committed to the cause,” said GM’s manager waste-reduction efforts, John Bradburn. If that doesn’t say something about The General’s stance on the environment, maybe this will.