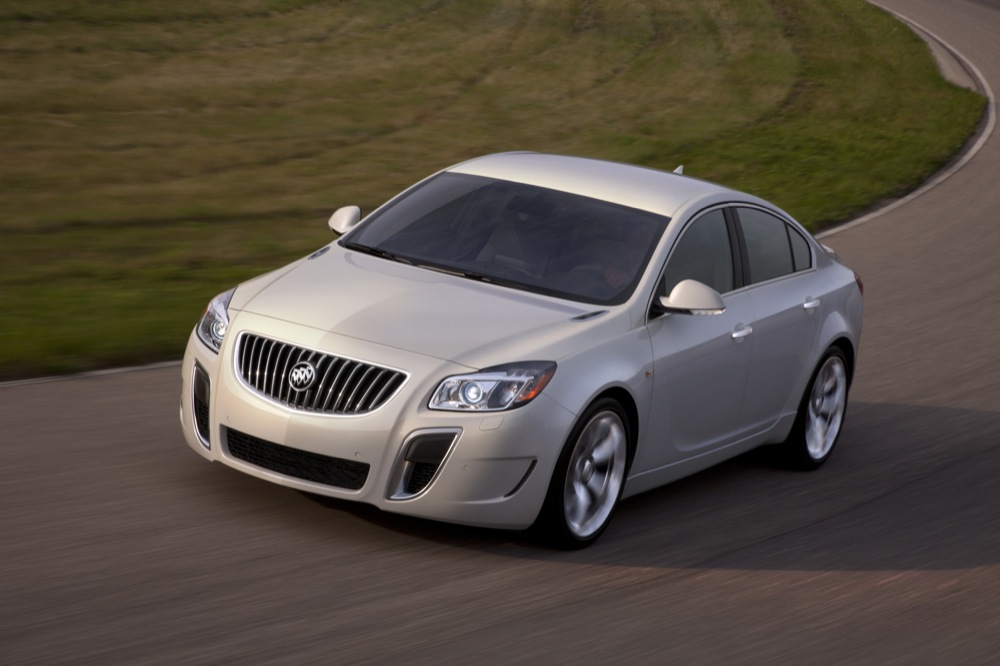 We knew the Buick Regal GS was officially coming for some time now. Last month, we even were witnesses to spy shots that leaked on the Internet. Now, officially, General Motors is pulling the sheet off the top-end Regal. And it seems to be missing a few things.

Going on sale in the second half of next year, the Buick Regal GS features a more beefed up version of the standard Regal’s 2.0L turbocharged ECOTEC engine with 255 hp and a meaty 295 lb.-ft. of torque mated to a six-speed manual transmission. The sport sedan will launch from 0-60 in under seven seconds and can be brought to an abrupt halt thanks to a hearty set of Brembo brakes.

Outside, the GS sees noticeable differences form the standard Regal, with several styling cues borrowed from its German counterpart, the Opel Insignia OPC. Up front is a pair of striking, fang-like air intakes that add a true dimension of aggression to a car under a brand that has been working hard to attract younger customers. Out back we see chromed exhaust ports, complemented by the (optional) 20-inch chrome wheels. The interior of the GS remains fairly unchanged from the standard Regal, which isn’t a bad thing. Drivers and passengers can enjoy music from a 9-speaker Harmon/Kardon audio system while sitting in 12-way adjustable leather seats up front.

Though the Regal GS is a kissing cousin of the Opel Insignia OPC (they are even built at the same assembly plant,) it will not be offering the all-wheel-drive drivetrain as seen in its counterpart. It also has taken an exclusive road in terms of an engine offering, opting for a 2.0L turbocharged four-banger instead of the OPC’s 2.8L turbocharged V6 that puts out 325 hp and 295 lb.-ft. of torque (the same engine seen in the Cadillac SRX Turbo, by the way.)

We know that we’ve taken a hard veiw on the Regal GS, but the fact that GM has omitted these two huge features from the car’s launch perplexes us even more.