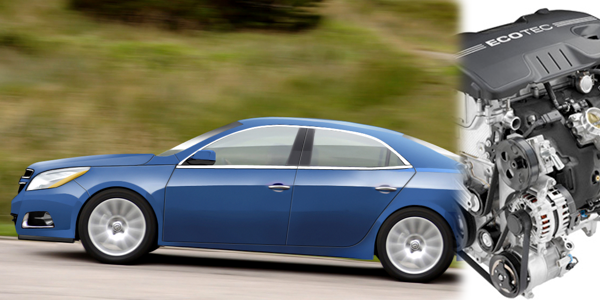 Just a few days ago, we showed you spy photos of the next-generation Chevrolet Malibu (our rendering above). Now, we’ve found out that the all-new Malibu will exclusively use four-cylinder engines – at least in in North America, eliminating the option of a six-cylinder powerplant.

While unexpected, the move to physically downsize the engine lineup of the most popular Chevrolet sedan makes sense, especially in light of new CAFE standards that are set to take effect in 2012 and last though 2016. More than anything, the decision underscores GM’s strengthened commitment to fuel economy.

While we aren’t privy to the actual four cylinder mills that will make their way into the new Epsilon II-based Malibu, we expect to see all the four-cylinder ECOTEC choices found in the Buick Regal, including the direct injected 2.4 liter LAF/LE9, the 2.0L low-output turbo (220 hp, 260 lbs.-ft. tq.) and the LNF high-output 2.0L turbo (260 hp, 260 lbs.-ft. tq.). A mild hybrid version of the ‘Bu will be offered as well.

What’s more, we’ve heard whispers that GM is working on an all-new 2.5 liter naturally-aspirated four cylinder ECOTEC, but this powerplant has not been confirmed at this time.

For those concerned about the availability of a six-cylinder engine in larger Chevrolet sedans, fear not: the next-gen Chevy Impala is rumored to offer a choice of six-cylinder engines, including the high-feature V6 (280 hp) and upcoming twin-turbo LF3. The latter may produce upwards of 350 horsepower and would match the power output of a V8 while attaining much better fuel economy.