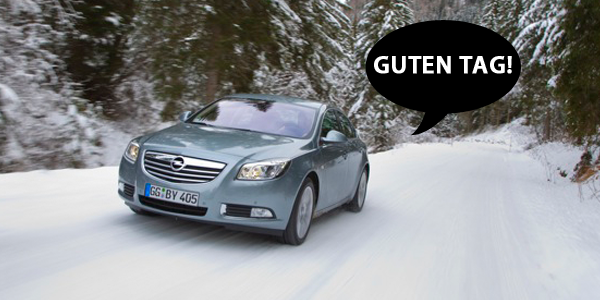 It’s no secret that General Motors markets a multitude of automotive brands all over the world. Some of these marques share common platforms and powertains (Chevy Cruze and Opel Astra, for example) while others are straight up rebadges (like the Opel Insignia and Buick Regal).

In North America, we know Opel in such vehicles as the Cadillac Catera, Saturn Aura, and Buick Regal. However, none of these products actually wear the Opel badge in their respective export markets. As such, it comes as a surprise that GM is looking to expand the Opel brand to international markets all over the world.
Currently, Opel is one of The General’s brands that has very little exposure outside of Europe. Earlier last year, GM tested Opel in the Chinese market by offering a limited range of Opel models, including the (old) Astra sedan and hatchback, Zafira, and Antara. The trial run moved 4,000 cars and contributed to GM’s decision to initiate a full-scale launch of Opel in China. The General hopes to position Opel as a premium European brand in the burgeoning country, joning the already-successful Buick brand.

Over the last few years, the Chinese auto market has been on a tremendous upswing, with a sizable amount of consumers attaining the ability to afford a premium vehicle. At this point, it is unclear how Opel will overlap with Buick in China and whether the two brands will offer the same vehicles with different badges (Opel Insignia and Buick Regal, Opel Astra and Buick Excelle). Needless to say, the GM Authority crew certainly hopes that GM isn’t up to its old tricks of badge engineering all over again.

In addition to China, GM is looking to bring Opel into Australia and various markets in the Asia-Pacific and South American regions. It’s currently unknown whether North America is a candidate for the European brand, but given GM’s decision to send Pontiac and Saturn to the automotive graveyard last year, we find it highly unlikely.