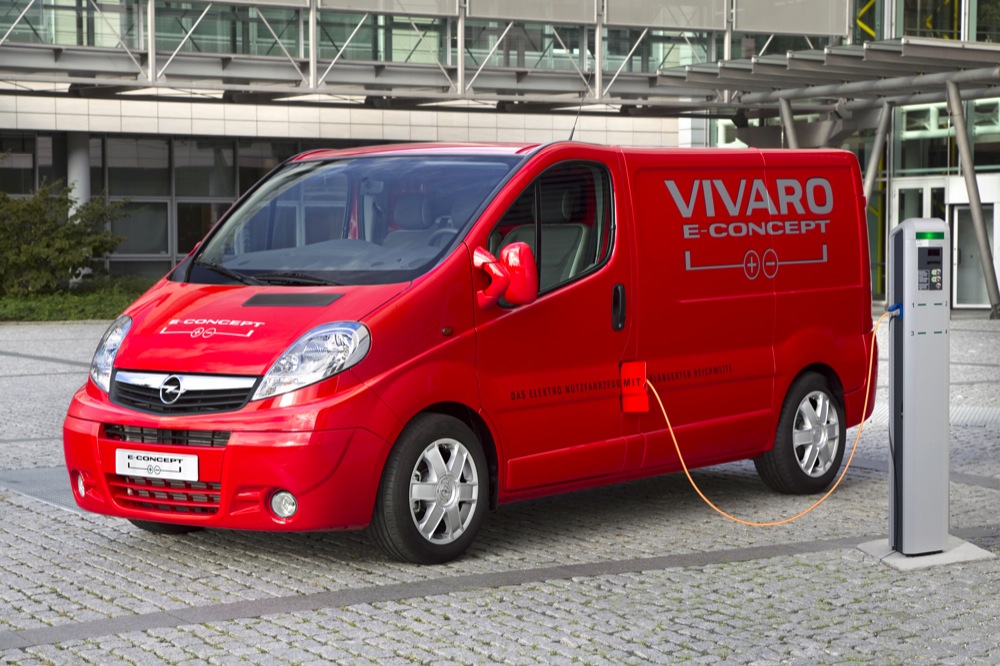 Last week at the IAA Commercial Vehicles Fair in Hannover, Germany, Opel introduced an extended-range (EREV) concept version of its Vivaro van. The research vehicle, as it’s being called internally, uses a 111 kW electric motor that delivers 370Nm (about 273 ft.-lbs.) of torque coupled with lithium-ion batteries mounted underneath the van’s floor, providing an electric range of 100 miles or 400 miles with the range extender engaged.

The placement of the batteries allows for superior handling and stability of the vehicle without hindering the van’s storage capacity. The e-Concept Vivaro is capable of carrying 750 kilograms (1,650 lbs) worth of stuff.

“We would like to test the acceptance of our advanced propulsion technology by showing the Vivaro e-Concept to the commercial vehicle specialists attending the show,” said Chris Lacey, Executive Director, International Operations Opel/Vauxhall Commercial Vehicles. “We are convinced that we will get a fantastic reaction from the people who use such vehicles on a daily basis: Electric mobility will allow them to travel in city areas which are now off-limits to petrol and diesel-powered vehicles and the range-extender technology makes it possible to use an electric van for normal routine business.”

Although not made official in the press release, it appears that the powertrain is an adaptation of the Voltec setup found in the upcoming Chevrolet Volt. At this point, Opel has no official plans to produce the Vivaro e-Concept, but we don’t see a reason for not making it a mass-produced reality sometime soon. The real question, however, seems to be whether the e-Concept will make it into production for the current- or next-generation Vivaro series.

But before we even get to answering that, how about bringing the Vivaro and Movano to the States?