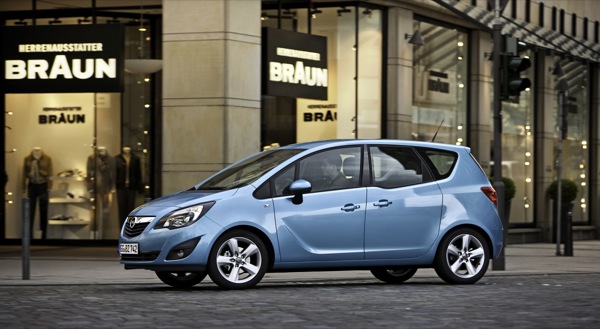 Opel is expanding the engine lineup of its Meriva MPV with the addition of three new diesel offerings, bringing the total count of available diesel engines in the Delta II-based vehicle to five. Diesel-powered Merivas make up as much as 37 percent of the MPV’s sales – so it’s more or less common sense for Opel/Vauxhall to improve the vehicle’s diesel lineup.

First up is a 1.3 liter-CDTI ecoFLEX good for 95 hp and 52.2 MPG (4.5 l/100 km). The engine features a 5-speed manual transmission mated to a variable geometry turbo-charger with closed loop combustion control – elements that increase fuel efficiency, lower emissions, and keep engine noise and vibrations to a minimum.

Right beside the 1.3 are two variants of the 1.7 CDTI producing either 110 hp (low-output) or 130 hp (high output). Both variants of the diesel mill are mated to a 6-speed manual transmission.

The 1.7 liter is also Opel’s first powerplant to feature an Opel-built engine management system called D1 that works to deliver efficient and dynamic performance (that’s right, you just read those two words in the same sentence). For customers, the end result is a vehicle that “continues to feel like new in terms of drivability and efficiency over the long term,” according to Opel. D1 also includes new diagnostic functionality and tools to help vehicle service technicians more accurately pinpoint specific component issues when the vehicle is brought in for service.

We expect that the Vauxhall Meriva will get access to the same engine choices real soon.

We’ve been long-term proponents of the Meriva and would love to see The General bring it to U.S. shores. But even if that happens, a diesel engine may not be in the cards. Aren’t those Europeans spoiled?!