There is one thing that both teams and race fans never look forward to, and that is a red flag. A red flag that put an end to an exciting race at that. At 2 hours and 15 minutes in, Mosport ALMS 2010 presented by Mobil 1 was halted due to a devastating crash that left 60 yards of guard rail in disrepair. For Corvette Racing, it robbed them of another chance to win a race. 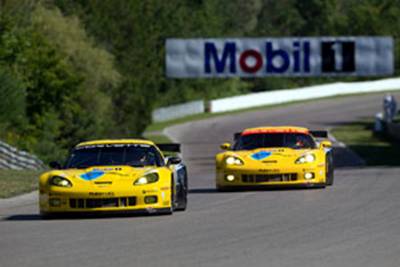 Before the race even started, Corvette Racing had a different strategy going into Mosport. Though winning the race was still the goal, the team decided to shuffle the drivers around, hoping for better driving combinations. Drivers Jan Magnussen and Olivier Beretta switched cars, pairing Magnussen with Oliver Gavin in the No. 4 Compuware C6.R and Beretta with Johnny O’Connell in the No. 3 car. The decision was made due to the drivers stating that they were more comfortable with a certain machine over the other. O’Connell started the race off in the No. 3 car, while Gavin began with the No. 4 C6.R, and the race got gritty for the team almost immediately.

Just before the 20th minute, O’Connell was forced to bring the No. 3 car to the pits due to damage on the side of the front bumper made from grinding with the Patron Tequila Ferrari 430. Though it was nothing a little bit of Bondo couldn’t fix, it forced the team into a bad spot early on, making the mountain to victory harder to climb. Nearly two hours after, the race came to an explosive halt.

Coming onto the Andretti Straightaway section of the track, Driver Luke Hines and the Orbit Racing Porsche 911 made contact with Jonny Cocker piloting the Drayson Racing No. 8 LMP race car, forcing Hines off the track and into the guard rail (watch it here). The Porsche smashed into pieces instantly, causing tires and debris to go flying all over the track. The car then recoiled of the rail and back into the track-  nearly into the Corvettes- and tore 24 posts and 60 yards of guard rail right out in the process. Luckily, Hines was no more than dizzy after the impact. The red flag was waved after a failed attempt to restore the mandatory guard rail, closing the race anticlimactically and bringing about the checkered flag to conclude the event. Corvette Racing program manager Doug Fehan has boiled down his team’s race into the following words:

“Success in racing requires 25 percent great car, 25 percent great team, and 50 percent good luck. We’ve got the first two handled, but we haven’t been able to get any good fortune. We had two cars that were good enough to win today, and after all that happened, they still had a shot to win it at the end. The premature end to the race was heartbreaking.”

It has now been ten races since Corvette Racing tasted victory. Corvette has one last chance to grab a win during the grueling Petit Le Mans at Road Atlanta in Braselton, GA. The 10-hour/1,000 mile race will air on October 2nd at 11:15 AM and will be televised on SPEED from 11 AM to 9:30 PM ET.