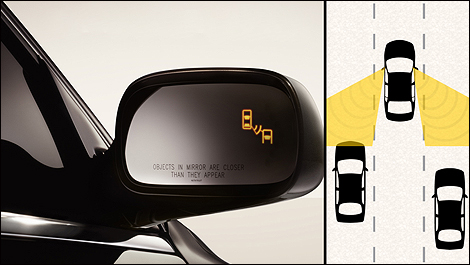 Did you know that it was Cadillac that first introduced night vision in production cars back in 2001? Introduced in the Cadillac DeVille, this high-tech safety feature was made to help drivers detect the things headlamps could not catch in the dark. Today, however, the option is no longer available. But there are still other important active safety features obtainable in the vehicles of GM’s premier marque. Now, the Wreath and Crest is beginning to experiment with what has been come to be known as “active safety”.

Active safety involves features that work to prevent accidents, including such technologies as stability control, Intelligent Speed Adaptation (ISA), or automatic braking. This is opposed to passive safety features such as airbags or seat belts, which aim to reduce injury or damage in an accident.

An active safety feature currently available throughout the Cadillac lineup is the lane departure warning signals, which uses camera-based detection to watch lanes on the road and alert the driver if they drift in and out of lanes without signaling. The features also alerts the driver if the signal is kept on for too long.

Another example are the blind spot alert systems that are also available in Caddy models. This system provides the driver with a visual cue such as a signal on the wing mirrors that lights up if other vehicles are present in the driver’s blind spots.

And yet another notable feature, but not the only other one, is adaptive cruise control. This feature detects traffic in front of the vehicle and slows the speed to maintain a preset distance from whatever is in front of the driver, in turn helping avoid collisions. Intelligent, no?

Despite these great advances, Cadillac has bigger plans for the future. John Capp, Cadillac’s director for Global Active Safety, sees a future where technologies could eliminate accidents altogether. He envisions in-vehicle Doppler radar technology to catch obstructions or traffic jams far ahead of the vehicle.

Even more distant in the future could be cars that can communicate with each other autonomously. Vehicles could also communicate with traffic signals and buildings. All of these things could allude to a future without automobile accidents.

If this is too mind-blowing for some of us out there, keep in mind that this may not happen in our lifetimes. But warn your kids that someday, their cars may drive themselves. But then again, where’s the fun in that?