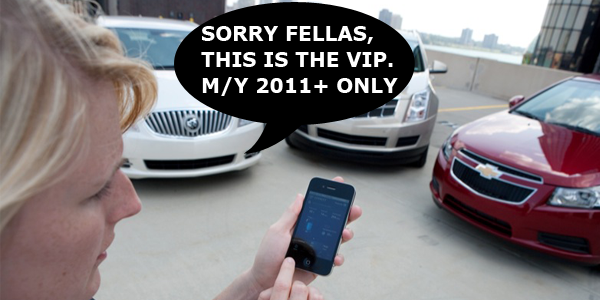 It’s no secret that we were abundantly excited about GM’s recent announcement of the soon-to-be-released smartphone apps that allow owners to remotely control their Chevy, Buick, GMC, and Cadillac vehicles (you can listen to the excitement on our podcast here). A brief summary: the apps will give us the ability to do everything one can currently perform using a traditional key fob, including locking and unlocking doors, activating the horn and lights, as well as remotely starting the vehicle. However, GM’s announcement curiously stated that “Owners of most new 2011 [GM vehicles] will be able to take advantage of said features.

Well, we’ve received a slew of letters in our mailbag about the whole “2011” part, most of which were asking whether owners of pre-2011 models will be able to take advantage of the functionality provided by the apps. Well, we now have the official answer, straight from The General.

It appears that the aforementioned OnStar functionality is driven by new (9th-generation) hardware that will be included in 2011 model year GM vehicles. As such, the older models won’t be able to be retrofitted or upgraded to take advantage of the apps in question.

While that’s GM’s official stance, we wonder what the ever-creative aftermarket community will cook up. We also wonder whether significant market demand (and perhaps a wee bit of pressure on GM) will cause our favorite automaker to offer an upgrade kit of some sort for pre-2011 models… because, you know, we don’t see many shelling out for a new vehicle to take advantage of these features(as cool as they may be).