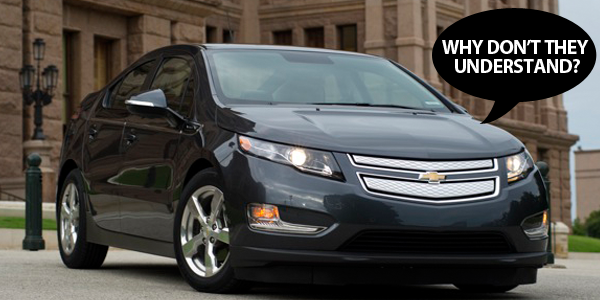 You may not be alone in thinking that the Chevy Volt’s $41,000 price tag is too high, but General Motors is standing by its $41,000 MSRP for the hotly-anticipated EREV. In fact, GM executive director of hybrid and electric powertrain engineering, Larry Nitz, has the following to say:

“I look at it and say with a federal tax credit, it is $33,500. We think there will be a plentiful supply of customers at that price.”

But the price has been torn to shreds on the Volt Facebook page, media personalities, and competitors. Barb Samardzich, Ford’s vice president of global powertrain engineering, said the following about the price:

“Our perspective is we want to be able to provide a solution that works for all of our customers, and at $40,000 or $41,000, you are taking a lot of customers out of that equation,”

Nitz argues that the Volt is in a class of its own because its uses a gasoline engine to extend the vehicle’s range by another 300 miles once the 40 mile battery range is used up.

“It’s in a market of its own. Where else are you going to go to get one of these things? There is no other choice.” Nitz said.

When GM announced the Volt’s price, one of the following two things could have ensued: either consumers, the press, and the media would cheer… or they would object. Guess which one transpired!

Most consumers (as well as the majority of the media) don’t realize that GM’s decision to price the Volt at $41,000 is a result of the vehicle’s components. Let’s put this into perspective: how much does the Volt’s battery pack cost? What about the engine-generator and the transmission?

Not to sound unnecessarily naive, but it seems that the Volt’s critics are of the opinion that GM took a trip to the local auto parts store and bought the EREV’s components at the parts desk. Needless to say, this is not so. GM had to design, engineer, and produce the unique parts to meet the intricate specifications of the Volt. How unique? Well, the Volt is as unique as you get. There’s nothing else like it.

As for other manufacturers (read: Ford) – the boys and girls at Dearborn decided to take advantage of the Volt’s public perception issue. You see, Ford understands that the public (wrongly) compares the Chevrolet Volt to the Nissan Leaf, even though the two vehicles are completely different. In fact, the upcoming Ford Focus EV will be very similar to the Leaf in that it will be a purely electric vehicle. In this case, Ford is leveraging as much negative Volt PR as it can to push its own product (even if it’s a more distant reality that the Volt).

In the end, a whole slew of misinformation and not enough understanding have people in a frenzy about the Volt’s price. It looks like the Volt marketing team still has some work to do in informing the public at large about the Volt and its unique benefits.

PS: most recently, we discussed the Volt’s price tag on the GM Authority Weekly podcast that you can listen to right here.