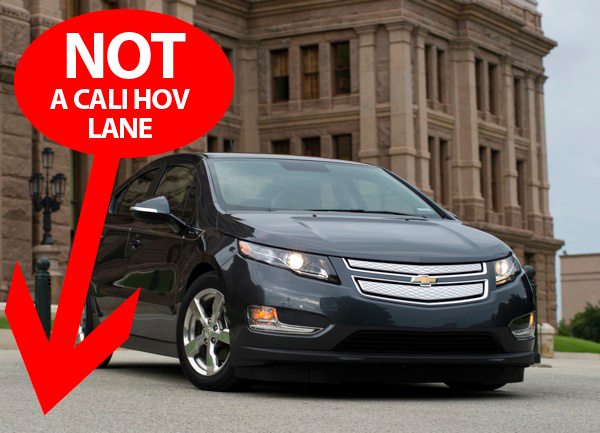 Well, this can’t be good: the California Air Regulation Board (CARB) did not accept the Chevrolet Volt to the list of vehicles permitted to drive in California’s High Occupancy Vehicle (HOV) lanes. It also didn’t grant the Volt access to a $5,000 state-funded rebate. How come?

Despite the Volt being fully capable of a 40 mile pure electric range (which is good for 80 percent of the American population’s daily commute), the EREV does require an Internal Combustion Engine (ICE) fueled by premium gasoline to extend that range. Therefore, CARB has classified the Volt as any other run-of-the-mill car, truck or SUV with an ICE. You may be rather perplexed by this, but that is the fact of the matter.

Despite the moot decision setforth by the CARB, the organization further went on to give the full privileges, along with the rebate, to the upcoming Nissan Leaf – an electric vehicle with a measly 100-mile range. CARB is also in the process of realigning its regulations to only focus on zero-emission vehicles, which would supposedly allow it to be more selective on just what vehicles can drive in the HOV lanes. Being that as it may, the Honda Civic CNG somehow still made the list while emitting greenhouse gasses.

So, is CARB brown-nosing the Japanese brands, or is it simply splitting hairs? Probably a little bit of both. However, Chevy Volt fans that reside in the Golden State should support the SB 535 bill, which would allow the Volt as well as vehicles like it to immediately enter HOV lanes without any hassle.