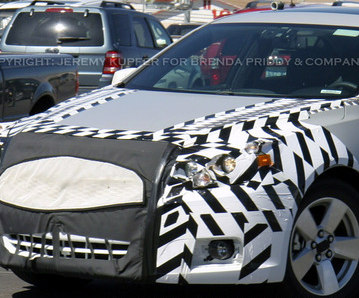 Well look at what we have here: a somewhat-undisguised mule of the next-gen Chevy Malibu has been spotted!

The 2012 ‘Bu is expected to begin production in late 2011 at GM’s Fairfax, Kansas assembly plant that recently received a $136 million investment. The spy pics show Chevy’s mid size sedan with all-new sheetmetal, a lower cutline that runs through the door handles, a new curve to the trunk, and more subtle wheel arches.

It’s been rumored that the Malibu will be the first bow tie model to take styling cues from the sizzling-hot Chevy Camaro – especially in the front and rear fascias. Unfortunately, GM engineers did their utmost best to mask the test vehicle’s front and rear ends this time around, so we can’t see any Camaro-inspired cues on the vehicle in the photos.

The 2012 Malibu will use the shortened version of GM’s global Epsilon II architecture that’s used by the Buick Regal and Opel Insignia. Given the Epsilon platfrom’s global roots, it’s possible that the new Malibu will be sold all over the world rather than just in the United States and Canada. While the next ‘Bu is expected to lose a few inches in length, but this doesn’t necessarily mean that interior space will suffer.

Expect to see at least three engine choices, including GM’s excellent high-feature V6, direct-injected 2.4 liter ECOTEC, and a mild hybrid mill. A 2 liter turbo ECOTEC may be a possibility to battle with the Ecoboost powerplants in the Ford Fusion.

Click over to the source to see more of the spy pics.

And before I forget: is it just me, or does the new cutline imitate that of the new Mercedes-Benz E Class?