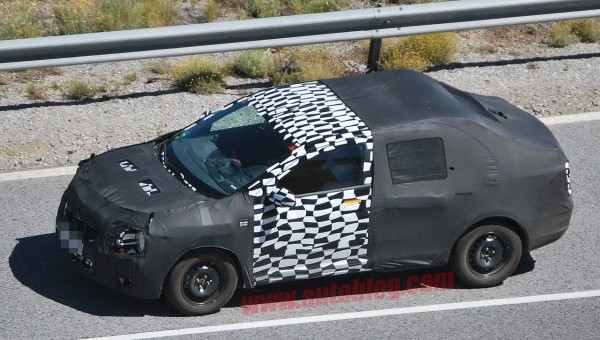 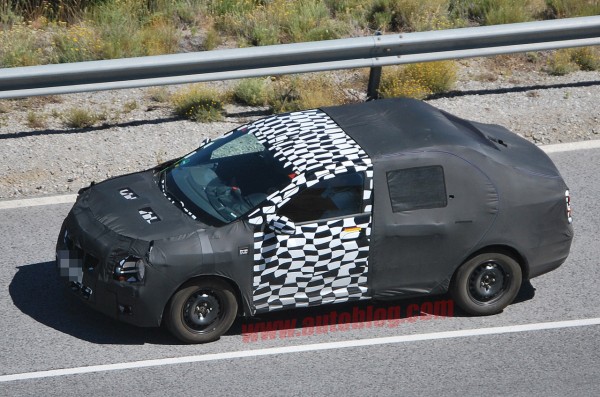 Well looky here. Autoblog’s spy photographers were able to capture a bunch of camo’d 2011 Chevy Aveo hatchbacks along with what is possibly a sedan version of the same car. Aside from some patent renderings, we haven’t seen (or heard) anything about the bow tie brand’s completely redesigned Aveo sedan. So if the vehicle in the spy pics is, in fact, the non-hatchback variant of the Gamma II-based Aveo, this may be the very first time we’ve ever seen it.

Autoblog points out that very little of the photographed sedan contains what we’ve seen of the five door model so far. For example, the doors, wing mirrors, and rather dissonant handles are all elements that appear to be different than the Aveo hatch. We could turn a blind eye to these, however, since the most interesting piece of the puzzle seems to lie in the vehicles’ lug pattern.

The sedan in the spy pictures clearly uses four lugs, whereas every other Aveo mule we’ve laid eyes on uses five. We think it’s safe to say that The General would prefer to share as many parts between the two variants of the Aveo as it can, especially since it’s engineering the vehicle from the ground up and thus has the ability to realize whatever cost savings it desires (through parts sharing). Therefore, we’d think that our favorite automaker probably isn’t interested in using entirely different rotors, wheels, spindles, and other mechanical rolling stock just for a different body style of the same model.

At this point, we’re not sure what model Autoblog’s spy shooters captured. It could even be a vehicle from an entirely different manufacturer used for testing and comparison purposes or it could also be a sub-$10,000 model that we haven’t seen or heard of yet. Lastly, it could also be the Chevy Sail sedan that GM recently let loose in the Chinese market. What do you think? Sound off in the comments.