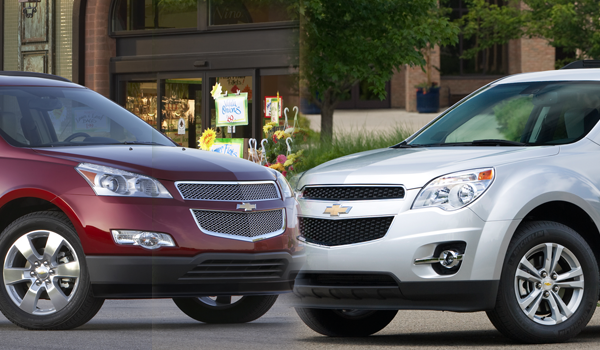 It’s no secret that Chevrolet is hitting all the right notes with its lineup of crossover vehicles – the Equinox and Traverse. In fact, we gave the Traverse a perfect five-star score several weeks ago when it resided in the GM Authority Garage (our review here). And it looks like crossover buyers at large are taking note, since nearly two out of three Traverse and Equinox buyers in the United States traded in non-Chevrolet vehicles.

If you’re thinking that this number could include trades from other GM products, you’re right: nine percent of buyers traded in a Buick, GMC, or Cadillac. But consider that nearly half of Equinox and Traverse buyers traded in non-GM vehicles – 45 percent of Traverse and 44 percent of Equinox sales are to non-GM trades – and it’s clear just how well Chevy’s crossovers are selling.

What’s more, the two bow tie-wearing crossovers are helping Chevrolet retain owners of discontinued GM brands (read: Pontiac and Saturn): 11 percent traded in a product from a discontinued GM brand when buying the Equinox, while 9 percent did so while opting for the Traverse.

This is good news, as many observers were concerned about The General’s ability to keep Saturn, Pontiac, Hummer, or Saab owners in the GM family after the respective brands’ discontinuation last year.

To further prove that Chevy’s crossovers are flying off dealer lots at a breakneck pace, Chevrolet has sold 120,000 Equinox and Traverse models in the first six months of 2010 – which represents an 80 percent increase calendar year-to-date.

“Equinox and Traverse are attracting owners of competitive vehicles, including Fords, Toyotas, and Hondas to Chevrolet showrooms,” said Alan Batey, vice president, Chevrolet Sales and Service. “For these buyers, Equinox and Traverse offer the flexibility and fuel efficiency they have been looking for in a crossover, as well as the design, performance and value that define Chevrolet.”

While it’s great to see GM making inroads in the CUV space, we wonder whether The General could be even more successful if it took a few suggestions out of our playbook. Want to know what we mean? Click here and listen to the GM Authority Debate show where we focus on GM’s crossovers.