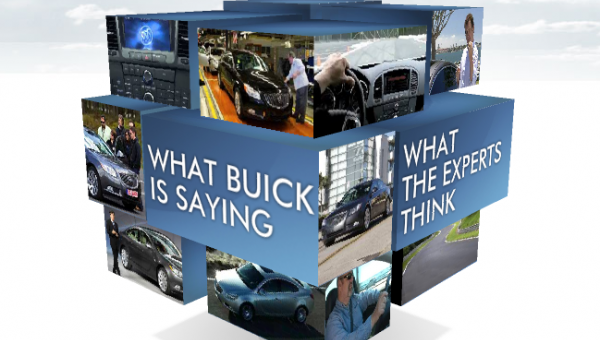 As expected, Buick has launched its Moment of Truth website, where the Tri-Shield brand invites “consumers to experience the 2011 Buick Regal through an interactive online experience.” The website is a non-traditional web-based effort by Buick that serves as an online aggregator, pulling in content from a variety of online sources and giving users the ability to share said content on their social networks of choice.

According to Buick, anyone can contribute to Moment of Truth by sharing their stories related to the Buick Regal and posting them on the web. The website (pictured above) has a very modern look and makes perfect use of an animated user interface to create a superb user experience.

As more Regals make their way to dealer lots across the U.S. and Canada, Buick is doing a fine job spreading the word about the Epsilon II-based vehicle. But as you may well know, Buick’s biggest challenge is the perception of being “your grandfather’s car.” While new (and exciting) product such as the Regal and LaCrosse go a long way towards changing public opinion, they still need to be reinforced by a solid marketing campaign.

As such, Buick is taking advantage of both traditional and unconventional marketing approaches in transforming the public’s opinion about itself and its vehicles. It has already launched two Regal television commercials (here and here), is hosting Remix parties throughout the U.S. featuring the Regal, LaCrosse, and Enclave, and has now added the Moment of Truth website to its arsenal of marketing instruments. However, the Tri-Shield brand faces a certain danger with the Moment of Truth and the site’s openness.

General Motors has already seen the danger of completely opening the tubes when Chevrolet asked the public at large to create an ad for the 2008 Chevy Tahoe SUV. Within days of the contest, YouTube became filled with anti-Tahoe clips, calling out the SUV for its gas guzzling and non-green nature. These anti-Tahoe clips are still around today. Buick faces a similar hazard with Moment of Truth, although with a different set of characteristics (the Regal is by no means a gas guzzler).

We’ll see the way the (social media) cookie crumbles this time around, but I think it’s safe to say that the Buick Regal is a hot car… just take a look at all those user-generated reviews, first impressions, and pictures at the Moment of Truth.