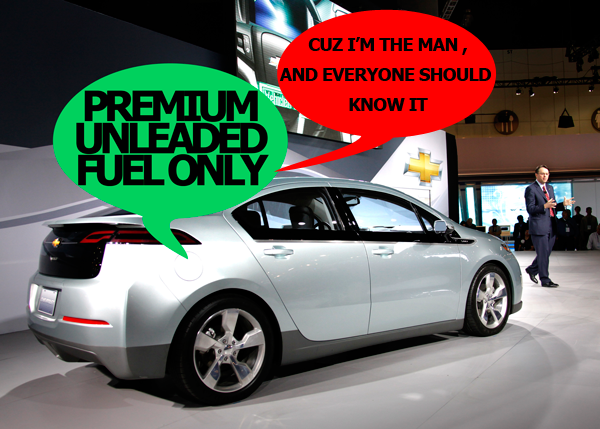 Just yesterday, we reported that the Chevrolet Volt will require premium 93 octane fuel for its seemingly docile 80 horsepower engine-generator. It should also be noted that the engine-generator never turns the Volt’s wheels directly. Instead, it only powers the electric motor and battery system after the Volt’s battery pack has been depleted. A few were shocked by the fuel requirement, others were puzzled, while some even conspired that The General is forcing consumers who would already be forking over $33,500 (after a full federal tax credit) to pay extra for the high-end stuff at every fill up. But let’s face it, filling up a Volt is not the same as filling up a Suburban.

When the news broke, GM seemed to be fairly tight-lipped on the matter. But over the course of the night (because that’s when we at GM Authority seem to get most of our work done), a few e-mails emerged with an official (yes, official) statement from General Motors:

“The Chevrolet Volt will be one of the most technically advanced (vehicles) on the road, and will be able to do things no other car can do.

What it really boils down to is that the Chevy Volt’s engine-generator should not be looked at as if it were any other internal combustion engine (ICE). It also shouldn’t be compared to one of those obnoxiously loud gasoline-powered boxes that feed power to your house when the electricity goes out after a bad storm. Despite the Volt’s engine-generator producing a measly 80 horses, it’s got a lot of work to do. If it needs premium, we can respect that. And like we said a few times before – many Volt owners will very rarely need to fill up at a gas station.

PS: in case you’re not following the “I’m the man” reference in the image above, perhaps you should take a look at this video (watch at least until 1:30). Warning – NSFW.