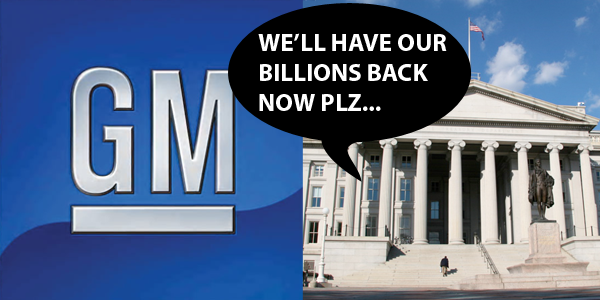 The Obama administration said that it will allow General Motors to be in charge of major decisions surrounding its initial public stock offering (IPO), including when and how the IPO will be conducted. The administration also said that sales will not begin before October of this year.

The United States Treasury has been under severe pressure to not only divest of its 60.8 percent stake in The General that it obtained last year during our favorite automaker’s bankruptcy, but also to receive a large portion of the $50 billion it spent doing so.

After paying off its initial government loan with interest, GM CEO Ed Whitacre made it a point that he wants to pay back all of the government’s investment, if possible.

The Treasury has hired Morgan Stanley and JPMorgan Chase & Co. as the lead underwriters for the IPO and we’ve received tips that the initial offering will be for a part of the U.S. government’s 60.8 percent stake in GM (rather than the full amount). The fee for handling the sale is expected to be shared among the two banks as well as a few smaller underwriters and could range from $75 million to $150 million – based on the stock sold. According to a U.S. Treasury Department official, this price is lower than most IPOs.

The Treasury also has hired New York investment bank Lazard Frères & Co. to advise it on the stock offering.

Analysts have pegged GM’s shares to be worth between $40 billion and $60 billion once the IPO launches. However, GM must overcome a few important issues before any shares are sold. These include restructuring its European arm Opel-Vauxhall, turning a profit for several consecutive quarters, and finding a long-term solution for a financing arm.