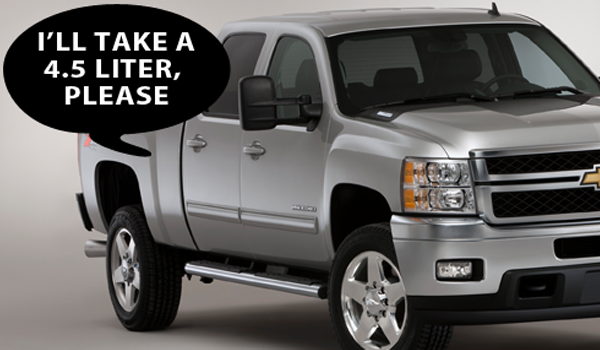 As the automotive market rebounds from the carpocalypse of 2009 and consumers flock back to dealerships, General Motors is revisiting plans to launch an all-new engine for its full-size pickup trucks. Only shelved a year ago, plans of launching the 4.5 liter Duramax V8 diesel have not left the minds of the engineers. Mark Cieslak, chief engineer of GM’s full-size trucks is all for the idea:

“The 4.5-liter V-8 is fully developed and ready…we could launch it in a heartbeat.”

It would seem that the only thing holding the engine from being released is GM’s decision to launch it.

Unlike the behemoth 6.6 liter Duramax V8 diesel engine featured on The General’s all-new HD trucks and co-developed with Isuzu, the 4.5 liter Duramax was developed entirely in-house by GM. Much like a conventional diesel, the powerplant features a reversed intake and exhaust that allows fresh air to enter the cylinders from the outer edges of the cylinder heads while exhaust gases leave the cylinder heads and feed into the turbocharger. This particular design saves around $600 per engine in reducing size and weight by discarding typical components such as the exhaust manifolds and intake.

As for just how much power these “light” Duramax engines can produce, engineers claim upwards of 310 hp and 520 lb.-ft. of torque, all while getting 25 percent better fuel economy versus a comparable-sized gasoline engine. This sort of middle ground seems to be a great alternative to the underpowered 6.0 liter Vortec gasoline V8 engine that puts out 322 horsepower but only 380 pound-feet of torque – the worst in its class. The 4.5 liter Duramax especially makes a lot of sense in the 2500 Heavy Duty models, where the best-in-class power of the 6.6 liter Duramax (good for 390 hp and 765 lb.-ft. of torque) won’t be necessary as it is in the bigger 3500 HD. It could also do well as an optional up-level engine in half-ton models such as the Chevy Silverado and GMC Sierra 1500 – where it would be the only engine offering of its kind in the segment.

That said, the biggest reserve GM has regarding the 4.5 liter still seems to be the price. For example, the 6.6L Duramax in GM’s 2011 HD trucks will set the consumer back a hefty $8,395. While the 4.5L Duramax should command a substantially lower price (including Allison 6-speed automatic transmission), it still begs the question of whether buyers will actually buy it. But if it delivers a 20 percent improvement on fuel economy than a comparable gasoline engine (as is the case with most diesels) then it makes quite a case – both for the buyer and for General Motors.