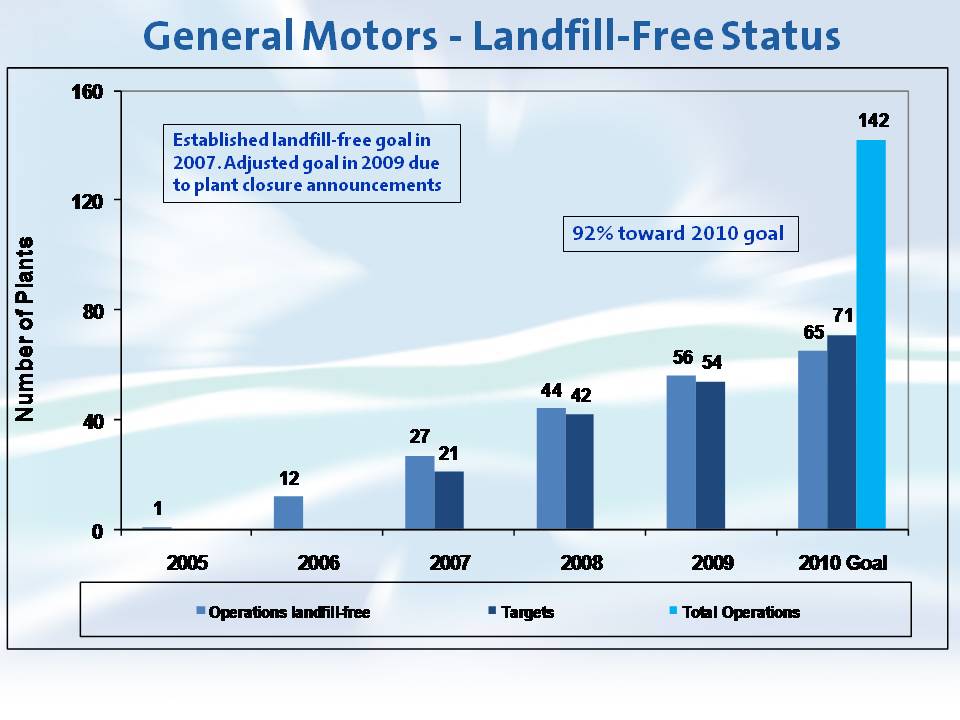 While the upcoming Chevrolet Volt may be the consumer focus of General Motors’ green efforts, there’s another side to the story that many may not be aware of. GM has ambitions goals for transforming automotive manufacturing into sustainable, environmentally friendly operations. In 2008, The General announced its goal to eliminate landfills from half of its major manufacturing plants worldwide by the end of 2010.

Although this may sound like a PR stunt where GM simply outsources the landfills or moves them offsite, our favorite automaker is actually reusing all materials that would normally be destined for landfills. GM recently applied to certify three facilities in China as landfill-free. With powertrain, stamping, and assembly plants in Qingdao, GM is 92 percent complete with its set-out goal.

General Motors’ North American operations have a total of 27 landfill-free plants. 24 facilities carry the certification in Asia-Pacific and Latin America. In Europe, GM operates 14 plant of the same environmentally-friendly caliber.

On average, these plants reuse 97 percent of generated waste and convert the other 3 percent into energy at waste-to energy-facilities. These energy sources work to replace fossil fuels.

While certain automotive manufacturers seem to carry a green image no matter what they produce, this is a good example of green technology that consumers may never see or hear of. Nevertheless, it’s important to recognize automakers’ efforts in environmentally responsible operations for the simple reason that manufacturing procedures may be more detrimental to the environment than the life of the vehicle itself.