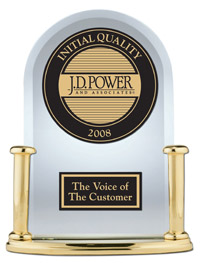 The 2010 J.D. Power and Associates Initial Quality Study (IQS) has been released and it’s chock full of surprises. The study surveys more than 82,000 purchasers and lessees of 2010 model year vehicles after ninety days of ownership and asks them about any problems during the time period.

This year, the industry average rose to 109 problems per 100 vehicles (PP100) from 108 PP100 in 2009. GM received fairly aceptable scores in the study this year, with Cadillac and Chevrolet scoring 111 PP100, Buick with 114, and GMC with 126. Unfortunately, all GM brands scored below average in the study. However, several GM vehicles received top quality honors in their respective classes, including the Cadillac CTS, Chevrolet Avalanche and Tahoe, and GMC Sierra.

And if that wasn’t enough to cheer you up – GM’s Grand River plant in Lansing, MI that builds the Cadillac CTS took the Bronze Plant Award for North/South America and was the top rated plant in the United States. Dan Nicholson, GM Vice President of Global Quality, Dan Nicholson had the following to say about these results:

“Delivering top-quality vehicles for our customers is our overriding priority. Our entire team is committed to improving our vehicles, and we never lose sight of the fact that the competition is also moving fast.”