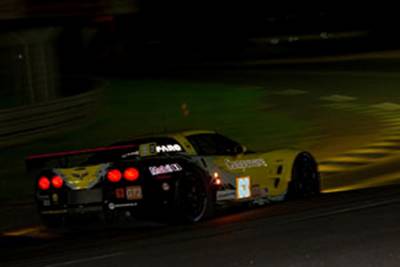 If you didn’t catch even five short minutes of the 24 Hours of Le Mans because you died (there really isn’t any other reasonable explanation, it’s a 24-hour race and DVRs are widely available) and could only follow up by reading dull posts on the internet, you have no idea what you really missed.

Clocking in the fastest two qualifying times in the GT2 class, showing up the Porsche and Ferrari teams, Corvette Racing took the top seeds and looked forward to winning their first Le Mans GT2 class title in some serious style. But this is Le Mans – and to finish first – first you must finish.

After completing 225 laps, the #63 C6.R retired early in the 17th hour due to an unforeseen engine failure (it has been 11 years since Corvette Racing had engine issues at Le Mans). At that point, all hope of winning (and finishing) rested on the #64 C6.R and its drivers. Considering the #64 car was in first place, things seemed to be looking pretty good. For three quarters of the race, the Corvette Racing Team was running away with a first-place finish in the GT2 class.

Then (of course) a crisis happened. This one happened to be caused by Peugeot LMP2 driver Anthony Davidson, who wasn’t even racing in the same class as the Corvette team. Being the driver of the only Peugeot left on the track and far behind Audi leaders in his class, Davidson made it his mission to quickly catch up. On a left-hand turn, he pulled a highly aggressive passing maneuver, cutting off Emmanuel Collard and the #64 C6.R as he was turning into the bend. The end result was catastrophic.

Trying to avoid a collision with Davidson, Collard applied the brakes but the forward momentum threw the tail out of the #64 car, pulling the entire vehicle into the barriers. The crash tore off half of the roof line, the rear fascia, spoiler, and rear quarter panels. If that wasn’t enough, the oil tank was found to be punctured and the was clutch was demolished. Luckily, all four wheels were still pointing straight and Collard, who was unharmed, managed to hobble the car to the pit garage before the oil tank ran dry. The crash also gave the lead to Porsche. 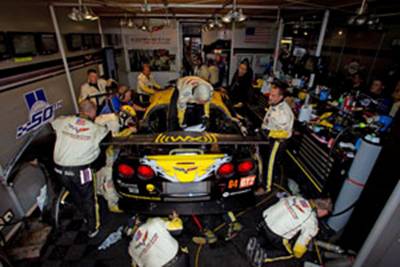 The pit crew managed to replace everything that appeared to be broken and the #64 ‘Vette was back up and running in a brisk 31 minutes. Driver Oliver Gavin, who replaced Collard, clocked in a bolting 3:59:35 lap time that was faster than his own qualifying run. Soon after that, white smoke began to appear from the ‘Vette’s exhaust pipes, perhaps caused from unseen engine damage from the crash an hour earlier. This meant that the day was done for Gavin and the #64 car, signaling retirement at the 18th hour for the Corvette Team.

No, Corvette Racing didn’t finish the most arduous race in all of motorsport this year. But it did give viewers and spectators a great and dramatic race, displaying an inspiring will to stay in it by fixing the seemingly unrepairable #64 car with so much immediacy and professionalism. In fact, this is just what kind of spirit is required to compete in such races as the 24 hours of Le Mans.

Davidson ended up retiring his Peugeot later that morning just before the time was up and gave way to a 1-2-3 Audi sweep in the LMP1 class. Gotta love Karma. Gotta love Le Mans.

Corvette Racing will be back July 11th for the much shorter 2-hour and 45-minute race at the American Le Mans Series Utah Grand Prix near Salt Lake City.