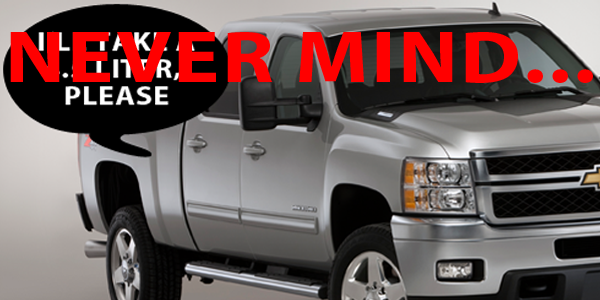 A source close to GM’s truck project has told us that General Motors still holds no plans of launching the rumored 4.5 liter Duramax V8 diesel engine. This comes as a contrast to recent reports quoting chief engineers pondering the plans to launch the engine (though never actually claiming that GM will go forward with the plans at all).

Though the engine was an in-house project that was very close to being finished, it still is – for all intents and purposes – not going to come to market… at least to the current model offerings. Perhaps the next-generation GMC Sierra and Chevy (Chevrolet) Silverado trucks will see the engine that boasts 310 horsepower and 520 lb.-ft. of torque (with 25 percent increase in fuel economy compared to a gasoline V8) as an option.

As the unofficial GM Authority truck guy I can say that I can agree with The General for once this time around and am perfectly okay with this. Yes, the 4.5 liter sounds great. That is until consumers have a good look at that certain omnipotent measure that really tends to heavily influence a sale: the price.

Diesel engines are not cheap, especially when it comes to the almost $8,500 extra cost for the 6.6 Duramax option in The General’s new Heavy Duty trucks. Sure, this mini Duramax could be a few grand less than the powerhouse 6.6, but who wants to fork over a (potentially) extra $6,000 for an engine option when they could instead maybe get a Sierra/Silverado Hybrid or deck out the trim level?

In all seriousness, just how many folks will actually purchase the 4.5 liter if GM decides to offer the engine? A couple thousand? It’s hard to make a case for an expensive Duramax engine if it can’t move in large volumes. However, there is currently a market segment that GM trucks do not serve. That segment is of course, off-road performance.

Sure, you could argue that the Z71 package is some sort of competitor to the Ford SVT Raptor that happens to be selling much better than anticipated. You could also argue that the Z71 can compete with the Ford’s aggressive looks, 550 horsepower engine and off-road racing suspension. You could argue these points, but you wouldn’t get very far. General Motors has a much better chance of generating sales volume by selling a true rival to the Ford SVT Raptor, for which there is an unforeseen high demand. GM can also make use of the available 403 horsepower 6.2 Vortec and 556 horsepower LSA engines. This type of truck can even pick up where Hummer left off.