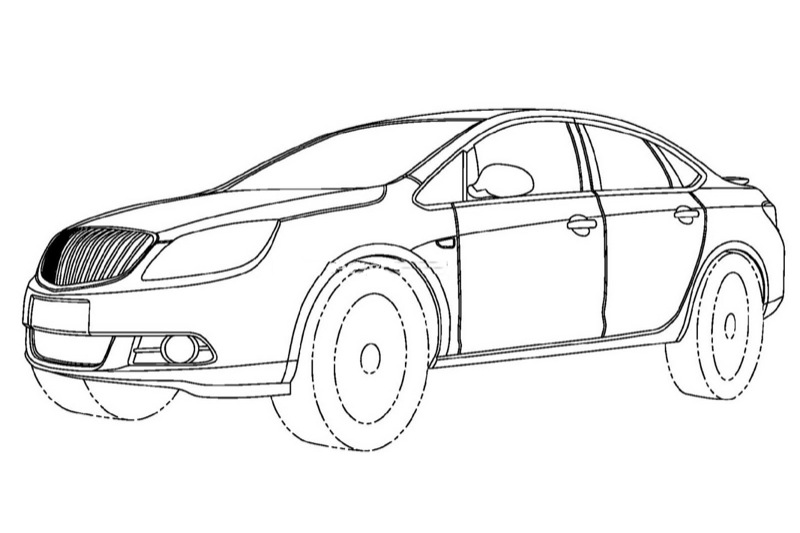 Oh how much we love the US Patent and Trademark Office! How come? Well, just think of all the vehicles we’re able to see ahead of their release date thanks to the government agency! From the next-generation Malibu to the upcoming Volt MPV5, the USPTO is like a spy photographer, but instead of hiding in trees on proving grounds like any good cameraman, automakers actually submit sketches to the USPTO, which in turn makes the sketches available for public consumption. And this time is no exception!

The sketches presented herein are probably the newest product to join the Buick lineup after the Regal sedan goes on sale this spring. These patent drawings portray a compact sedan based on GM’s global Delta II platform – the same architecture used by the Chevrolet Cruze and Opel Astra, along with derivatives such as the Chevy Orlando, Volt, and MPV5.

Just a few days ago, we got our hands on a few spy shots of this very sedan! GM already offers a hatchback version of this vehicle in China called the Buick Excelle XT, which itself is a rebadge of the Opel/Vauxhall Astra hatch. Therefore, the car you see here will in turn be the sedan variant of the Astra. What’s more, Buick already showed us this vehicle in rendered form during a presentation last year.
When the Astra/Excelle sedan makes its way over to American shores, it will not wear the Excelle nameplate, since Craig Bierley, Buick advertising and sales manger told Autoblog that the Excelle name won’t be coming to North America. Instead, Buick will most likely use the Verano nameplate.

Of importance are the dotted wheels in the sketch. Our patent-guru friends tell us that dotted lines often mean that the item is not part of the patent drawing and is used for representation purposes only. As such, the wheels are probably not to scale, which explains their enormous proportions.

We’ll most likely see two turbo four-bangers under the hood. If we were to guess, the 1.4-liter Ecotec (turbocharged inline four) that’s optional on the Cruze will be standard in the Buick. The 1.6-liter Ecotec (also a turboed four that’s good for 180 horses) that’s currently available as an option on the Excelle XT in China will most likely be the up-level engine.

But those are just educated guesses. We’ll see what’s really under the hood when the four door sedan goes on sale in China this summer and in North America in a year. Stay tuned!