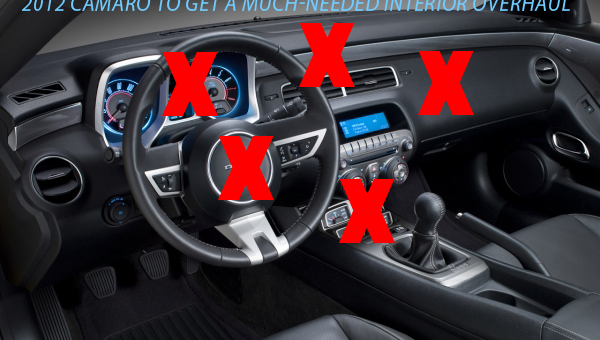 Remember the days when muscle car was synonymous with crappy interior? Well, it looks like those days are long gone – replaced by a new era where pony car buyers actually care about the quality of the interior, the materials of the dash board, and the overall aesthetics of the cabin.

One can say that Ford bucked the trend of pony cars having ugly/crappy interiors when it introduced the all-new Mustang for the 2009 model year. The interior of the all-new 2010 Camaro, however, wasn’t as lucky. With its subpar materials and rather unappealing aesthetics, Camaro fans who have either sat in or driven Ford’s cross-town muscle car rival clamored for a better interior. Having criticized the Camaro interior every step of the way, we at GM Authority put ourselves squarely in this category. As such, it brings me great joy to report that our dreams and/or prayers will finally be answered by GM!

Citing an unnamed GM insider, Edmunds reports that the 2012 model year Camaro will get a “substantially reworked interior.” While Edmunds wasn’t able to get many details about the much-needed update, their insider did say that the dash – specifically the large span of blackness in front of the passenger – will see most of the changes.

While these are much-welcomed changes, we sincerely hope that they will be accompanied by a redesigned steering wheel and both pairs of gauge clusters. What’s wrong with these elements in their current state? Simply put, they’re tremendously tacky in trying way too hard to be retro. Finally, we hope that an optional built-in (read: non-mountable) navigation system will join the the 2012 Camaro and its redesigned interior.

And that pretty sums up what we want from a new Camaro interior. What other changes are you hoping for? Let us know in the comments!