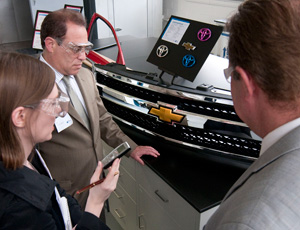 What could GM’s full-size pickups have in common with the compact Chevy Cruze ECO? If you’re thinking of towing capacities, you’re a little off. Instead, we’re talking about the electronically controlled grille louvers. That might sound fancy, but it is actually a very simple mechanism that improves a vehicle’s aerodynamics by reducing unnecessary airflow into the engine bay. This unneeded air just happens to be a huge contributor to drag and turbulence, common enemies of optimal fuel economy.

By closing off the grille, the air will move around the engine bay, resulting in greater aerodynamic efficiency. The clever minds of SRG Global, Inc. are responsble for this idea and have developed a prototype grille louver built specifically for The General’s full size trucks to help them achieve better fuel mileage.

That’s not to say that the engine does not require air – the powerplant still needs to be fed air to operate properly (and to cool off), especially when the vehicle is operating at lower speeds. Therefore, the grille louvers in question will remain open to let the breeze in. At higher (greater than 45 MPH) speeds, however, the increased air velocity means the grille louvers can close yet still allow enough air into the engine bay without hindering performance.

To make sure the engine is always operating at an adequate temperature, thermostatically controlled slats will monitor coolant temperatures and will open or close as necessary. SRG’s new designs will integrate the louvers into the structure of the grille itself, thereby reducing the cost of the system and making assembly easier.

Could The General’s next generation line of full size pickup trucks hit the 25 – or even 30 – MPG mark? We certainly hope so!