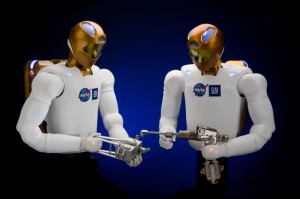 One of GM's goals is to lead in advanced technologies and quality. The innovations found in Robonaut 2 (R2) will lay the groundwork for advanced vehicle safety systems and safer plant operations.

In an effort to learn more about manufacturing and robotics, GM has built a humanoid robot with NASA. It will be launched into space later in 2010 to work on the International Space Station and is the first human-like robot destined to be a permanent resident of the ISS. The Robonaut 2, a.k.a. R2 (our initial coverage here) was developed in collaboration by GM and NASA to work alongside humans, whether in space or at GM’s manufacturing facilities (the latter option is much more long-term).

The R2, however, is not the only robot on the ISS. Dextre – the other station robot – was developed by the Canadian Space Agency and is used on the outside of the space station. It is made up of two arms to complete activities usually requiring astronauts to spacewalk. R2 weighs 300 pounds and consists of a head and torso with arms and hands just like those of people. It is planned to launch in September on the STS-133 mission aboard space shuttle Discovery.

In contrast with Dextre, R2 is much more human-like and will be confined to use within the station’s Destiny laboratory. There, R2 will work alongside people, making full use of its human similarities by using the same tools as the astronauts. Future advancements may enable R2 to operate in and move freely around the rest of the space station or even externally in space. Because of the R2’s human resemblance and its ability to use the same tools, the hope is that eventually the robot can be a “stand-in for astronauts during spacewalks or for tasks too difficult or dangerous for humans.” This is a future goal as R2 is not adequately protected for external use at this time.

Since R2 is still a prototype, it will be used within the station in an intermediate environments – functioning in zero-gravity space as well as work alongside humans. It will also provide valuable performance data that will shed some light as to how radiation and electromagnetic interference will affect the robot as well as its work with astronauts. Based on this information, teams on the ground may be able to provide the R2 with hardware and software upgrades capable of making the robot perform new tasks.

Currently, R2 is undergoing intense testing such as vacuum, vibration, and radiation testing – all essential to ensure the robot’s safety during spaceflight. This technology is also beneficial to GM’s manufacturing processes. GM plans to use some of the technology in R2 in “advanced vehicle safety systems as well as manufacturing plant applications.”

Alan Taub, vice president of GM’s global research and development, said that “The extreme levels of testing R2 has undergone as it prepares to venture to the International Space Station are on par with the validation our vehicles and components go through on the path to production. The work done by GM and NASA engineers also will help us validate manufacturing technologies that will improve the health and safety of our GM team members at our manufacturing plants throughout the world.” He continued to say that “partnerships between organizations such as GM and NASA help ensure space exploration, road travel and manufacturing can become even safer in the future.”

GM’s goals with the R2 project are to increase vehicle safety and the manufacturing processes. GM believes it can also inherently change and improve the processes it uses to manufacture cars and trucks based on research partnerships and projects like this. This, perhaps, is the take away point.