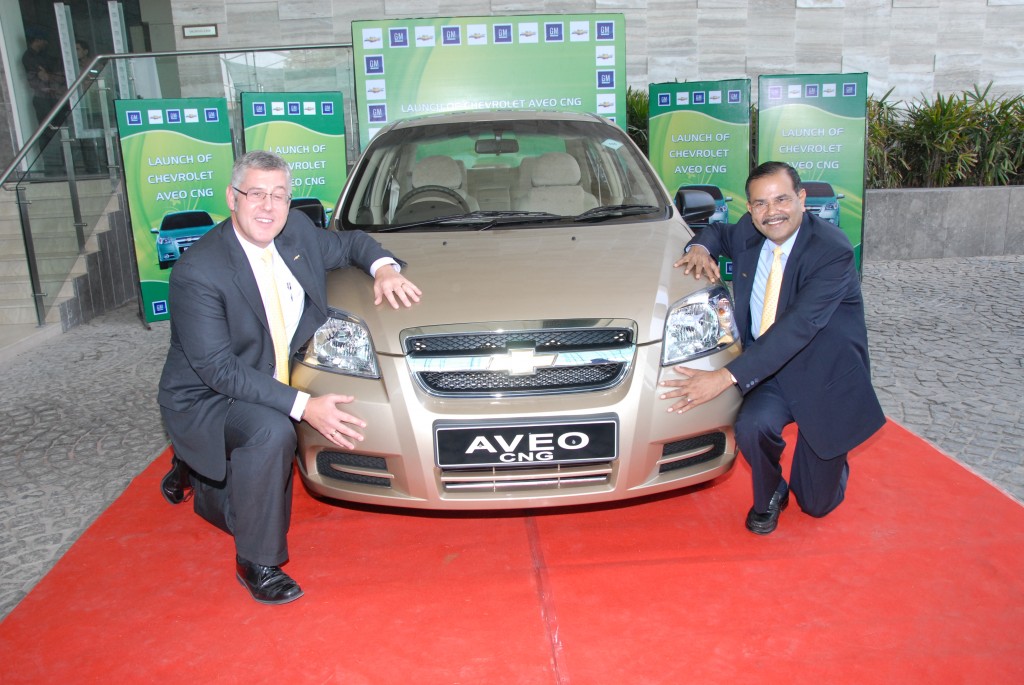 Say hello to the Chevrolet Aveo CNG (Compressed Natural Gas), a bi-fuel vehicle with a full sized gas tank. According to Karl Slym, President and Managing Director of GM India, the Aveo CNG has 54 percent lower running costs than a similar gasoline-powered car and 25 percent lower than one powered by diesel. It will have a range of approximately 180-200 kilometers (97-107 miles) under normal driving conditions and is compliant with India’s emission standards, named BS IV.

The Aveo CNG contains advanced natural gas technology to ensure quality, efficiency and reliability. Specifically, all CNG kit parts are fitted at the factory, including the CNG injectors, selector switch, and modified wiring and suspension. The body is also reinforced due to the extra weight of the cylinder. The Electronic Controller Unit (ECU) is also a fairly advanced piece of tech, calculating the opening times of each cylinder and acting separately on each gas injector.

Among the many benefits of CNG, a few stand out in the Indian-market Aveo. First is efficient CNG combustion due to the precise electronic fuel delivery. Second, the performance of the engine is very stable in CNG mode: since CNG is operated electronically, required service is minimal. Lastly, the Aveo CNG has reinforced and modified suspension to cope with the added mass.

The Chevy Aveo CNG will come with a 3 year, 100,000 kilometer warranty and has a service interval of 6 months or 5,000 kilometers, whichever comes first. GM India already sells the Aveo sedan and hatch (named UV-A). You can bet that we’ll be following the sales performance of this line extension, even though it’s not the all-new Aveo we’re so desperately waiting for.

We have GM’s presser after the break.