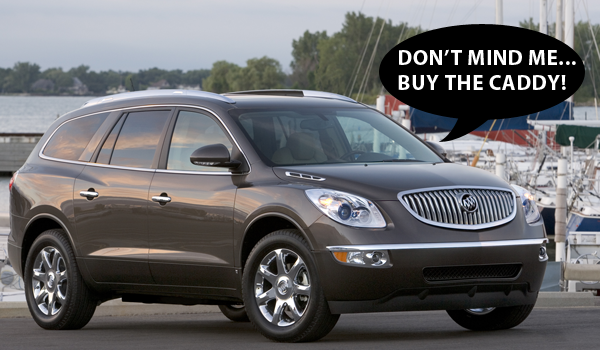 The first time we heard that Cadillac would be getting a 7-passenger vehicle based on GM’s Lambda platform was before General Motors went into bankruptcy about a year ago. But this Wednesday, Karl Stracke, Vice President of global engineering at Cadillac, told Inside Line that a Lambda-based Cadillac crossover is “absolutely a go.”

GM already uses the Lamda to underpin the Chevy Traverse, GMC Acadia, and Buick Enclave crossovers. But using the architecture to underpin a Cadillac crossover is a hotly-debated (read: controversial) topic within the General Motors fan community (read why below).

There’s no word on when we may see Caddy’s biggest car-based crossover or about engine choices, but we wouldn’t be surprised to see GM’s high-feature 3.6L or a boosted version of GM’s 3.0L six currently under development as the LF1. But both of these powerplants, however, may prove to be too weak to motivate the 7-seater in ways Cadillac may prefer.

What a terrible idea. At least that’s the consensus of the GM Authority team. How so? Well, Cadillac seems to be losing sight of what it wants (or needs) to be. If it’s a truly premium brand, sharing platforms with lesser vehicles needs to stop. Let me clarify: it’s okay if the platform began as a Cadillac and then went on to underpin Chevys, GMC, and Buicks. It’s not okay to go the other way.

You can be sure we’ll be discussing this very topic on this week’s GM Authority podcast, so stay tuned for more insight and commentary from your favorite General Motors fan site! But before we record that, let us know what you think in the comments below.