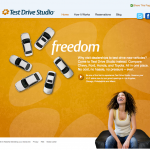 When we discovered GM’s plans to launch the Test Drive Studio, we welcomed the bold move in wide anticipation of the Studio’s arrival. After some time, however, we began to wonder whether GM will apply the Test Drive Studio concept to its other brands – Cadillac, GMC, and Buick.

In case you missed what the Studios are all about, here’s a quick refresh: GM is currently in the process of launching the first four Test Drive Studios that pit Chevy products against those of Honda, Toyota, and Ford. Studio visitors will be able to test drive Chevys agaisnt competing models from the aforementioned brands in a single location without the (possible) pressure of a traditional dealership. The studios will not be branded as Chevrolet and will be located in metro areas, with the first four locations opening in Los Angeles, Miami, Chicago, and Philadelphia. It’s our opinion that the Studio initiative is a move to reach people who would otherwise not even consider a Chevy. The Studio will attract these people to come in and check out the competition in a single location – all without the need to dealerhop. While checking out non-Chevrolet vehicles, these people would take notice of Chevrolets. After interacting and driving the bow tie-branded vehicles, these people would see their exception quality and add them to their short shopping lists.

And this brings us to the point of this article: from what we know, The General currently doesn’t have plans to add Buick, GMC, or Cadillac to the Studios’ stable of GM brands. However, we’d love to see Studios pitting Cadillac vehicles against those from BMW, Audi, and Lexus. The same goes for Buick and GMC.

So even though GM may not have plans to add Caddy, Buick, or GMC to the Studios’ lineup of vehicles, our favorite could be testing the waters with the Chevy Studios. If the Studio initiatives carrying Chevrolets are successful, The General may add other facilities for Cadillac, Buick, and GMC (as well as add additional Chevy Studios in other geographics regions).

Adding more brands to the Studios, however, may be a daunting task: if The General eventually decides to make its entire portfolio of brands available in the Test Drive Studios, then it will first need to address the issue of physical space. The addition of GM’s other three brands (each with multiple models) as well as the models of competitors will most likely lead to crowded showrooms, not to mention logistics issues that come with storing an increased amount of test drive vehicles in garages and/or parking lots.

Stay tuned as we explore GM’s Test Drive Studio in greater detail in a future article!