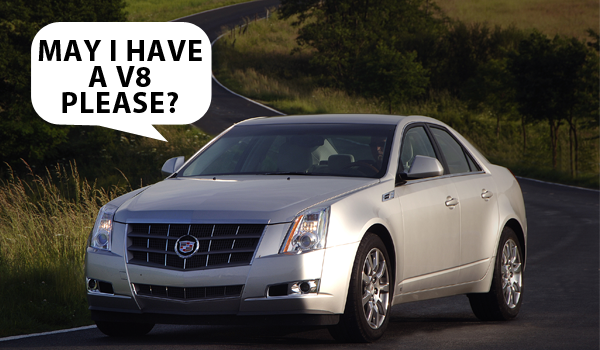 It’s safe to say that the Cadillac CTS has done (GM) well in recent years. Ever since the Mk. II model launched in 2008, it has won the hearts of automotive journalists the world over. Starting with its sharp angular exterior and elegant (yet sporty) interior, all the way to the game-changing juggernaut that is the CTS-V, people have learned to respect this car. And yet…

Yet amidst all the acclaim from highly-regarded news outlets such as Kelly Blue Book and Motor Trend, tons of design awards, and being the posterchild of Cadillac’s “Art and Science” theme, the CTS is still missing something; and that would be a mid-level engine option.

The CTS range currently has a continental rift between the 304-hp 3.6L V6 engine (now SAE rated at 312hp) and the explosive 556-hp LSA motor. That’s not to say that both engines aren’t great; the might of the LSA cannot be argued. The only problem is that for some, it’s too mighty. And even though the high-feature 3.6L V6 carries impressive credentials, it still isn’t spicy enough to satisfy the tastes that crave a vehicle with a power output of somewhere between 350 and 430 horsepower. Furthermore, competitive models such as the Lexus G460, Infiniti M50, BMW 550i, Audi S6, etc. offer the option.

The General can address this problem effectively and efficiently. It has a vast arsenal of engines and a few are well-suited to fill the void. Specifically, the much-respected 362hp L76 (last featured in the late Pontiac G8 GT) and the brawny 430-hp LS3 as well as its automatic transmission variant, the 400-hp L99 (both currently in the 2010 Chevy Camaro SS).

Though we have yet to cover this topic in our Debate Podcast series (update: we will do so), the point is that the Cadillac CTS needs to offer another V8 engine besides the thunderous LSA V8.

Here are three four reasons why:

The gen-II CTS is not at the end of its lifecycle – it still has a few more years to go before a replacement on the lighter and more flexible Alpha platform will take over and bring with it the mysterious 8-speed transmission. And let’s not forget that the current-gen CTS hasn’t even received an update since its introduction in 2008. Perhaps these engines are something to look forward to in a mid-cycle refresh that should be coming up in the next year (or so we’d imagine).

In any event, GM should do well and take care of one of the best cars it has ever spawned – or else it may get blitzkrieged by its German rivals.

This post is part of the GM Authority Opinion Desk series, where you can see exactly what’s on the minds of GM Authority writers and editors.