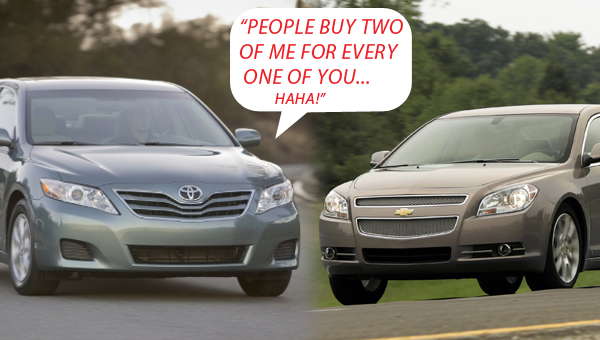 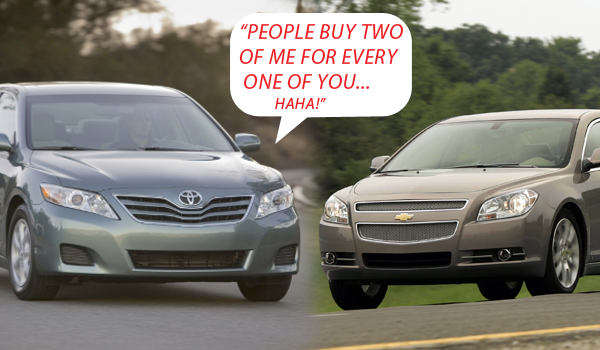 What defines a successful vehicle? Is it a car’s popularity, the respect it commands in the industry, the per-unit profits, or the good-ol sales numbers? For many mainstream brands, the scale on which a model’s success is measured is the last one in that list – the annual sales results. Ford’s F-150 and Toyota’s Camry are perfect examples of vehicles that are sales leaders in their respective classes, the latter selling close to half a million units in a single year! Since Chevrolet, along with the automotive press, have been touting the advantages of current-gen Malibu, emphasizing that it’s a better midsize sedan than the competition from Japan, some may be surprised to learn that our favorite bow tie-wearing midsize sedan has been outsold by the Camry by a wide margin for (at least) the last ten years in a row (numbers available after the jump)!

But things are on the up and up for the Malibu, since for the first three months of 2010, GM’s U.S. dealers delivered more than 49,000 copies of the midsize sedan. This represents a 58 percent increase over the same time period last year, resulting in the return of a third shift of nearly 1,050 jobs at GM’s Fairfax, Kansas plant. While that’s an astounding percentage increase, it should be noted that in 2009, Chevy sold a measly 161,568 Malibus in America, compared to 356,824 Toyota Camrys.

Nevertheless, the Malibu looks to be on track to move 200,000 units in 2010. Even though that’s still nowhere near the projected sales amount of the Camry (about 350,000), it’s still a hefty increase (that all Chevy and GM fans should welcome with open arms). In the mean time, Chevrolet has tons of work to do in catching up with the competition (read: Toyota).

Currently, we know that Chevy is hard at work on the next-generation Chevrolet Malibu, which should be revealed sometime in 2012. Most recently, GM announced that it will invest $136 million in its Fairfax, Kansas plant to build the next-gen ‘Bu. And just in case demand outstrips supply in that plant, The General also invested $121 million in the Detroit-Hamtramck plant for extra production capacity of the Malibu. Let’s hope that the 2012/13 model, along with GM’s creative marketing efforts, will close the tremendous sales gap between the ‘Bu and the Camry.

We have competitive sales charts of the Malibu vs. its most direct competition after the break!

Malibu Vs. The Competition