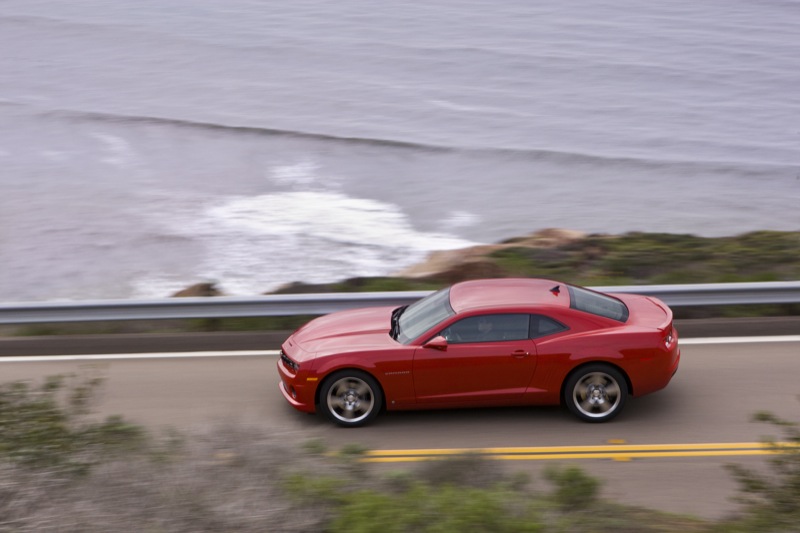 It’s always boast-worthy when a pony car gets a power boost on paper. For the Chevy Camaro, this news comes right on the heels of Ford Mustang’s most recent engine upgrade. The hot-selling (and even hotter looking) Chevrolet Camaro got just that, along with other significant updates for the 2011 model year. Extra sprinkles for the Camaro include the Synergy Green color scheme available on all trim levels of the hot-rod pony car as opposed to just the 1LT model, a Head Up Display projecting essential information onto the windshield, and the biggest deal- an SAE certified output of 312 hp. Let’s break it down…

For those who may not remember, the Synergy Green Camaro first appeared at SEMA 2009 in Las Vegas as a concept. Thanks to a significant amount of positive reaction, GM has implemented the eye-catching lime shade of green as a limited edition color only as the basic 1LT model in January. The General is now making the color scheme available for those who feel that the color palette for the 2SS model has enough green choices.

While it most likely will not be a stock option, the HUD is a very cool feature. Aside from pretending to be in a fighter jet, the HUD will show drivers their speed, RPM, selected gear, turn signal indicator, OnStar’s Turn-by-Turn Navigation, and many other features – all without ever having to take their eyes off the road. If only it was available with an altimeter and lock-on mode…

Now on to the update that most likely prompted you to read this article – the increased engine output. 312 hp and 278 lb.-ft. of torque from a naturally aspirated V-effing-6, running on 87 octane no-less! Remember when 250 horses from a V6 was a big deal? Seems like that was only a year ago. The most ironic part is it’s the exact same engine as the outgoing 2010 Camaro. All GM did was get it tested by the Society of Automotive Engineers and poof – a certified output increase of 8 horses and 5 torques. While this is great for advertising, it probably won’t change a thing about how the car drives.

It’s okay to feel somewhat let down. But hey, at least it still out-does the Dodge Challenger, right?

The minor color edition of obnoxious lime Synergy Green is nice. The HUD is also a welcome addition. However, better news would have been if The General could have shaved some pounds off the Camaro’s rather cumbersome curb weight. Just because SAE tested the V6 Camaro – the same high-feature 3.6L engine as last year’s model – and rated it at a higher 312 hp and 278 lb.-ft. of torque doesn’t make it any more athletic or faster. It just sounds like it is. Other automotive news outlets have also noted how the Camaro’s lifetime nemesis – the Ford Mustang with its new V6 and V8 engine upgrades – beats the Chevy’s pony outright in the power-to-weight ratio, thus leading to outrunning and outmaneuvering the Camaro.

As it stands right now, the Camaro is a middleweight trying to keep up with the increased agility and speed of the welterweight and more well-rounded Mustang. What matters with today’s sportscars is how well power is channeled into speed and handling – not who has the higher output. Until the next generation Camaro arises (which looks to be on the more athletic alpha platform and its speculated all-new 8-speed gearbox) – GM will continue to be heel-kicked by Ford’s Mustang in performance (and a better tailored interior). The updated 2011 Camaro begins production June 7, of this year. Maybe a more polished Gen. V Camaro will roar out in 2012…