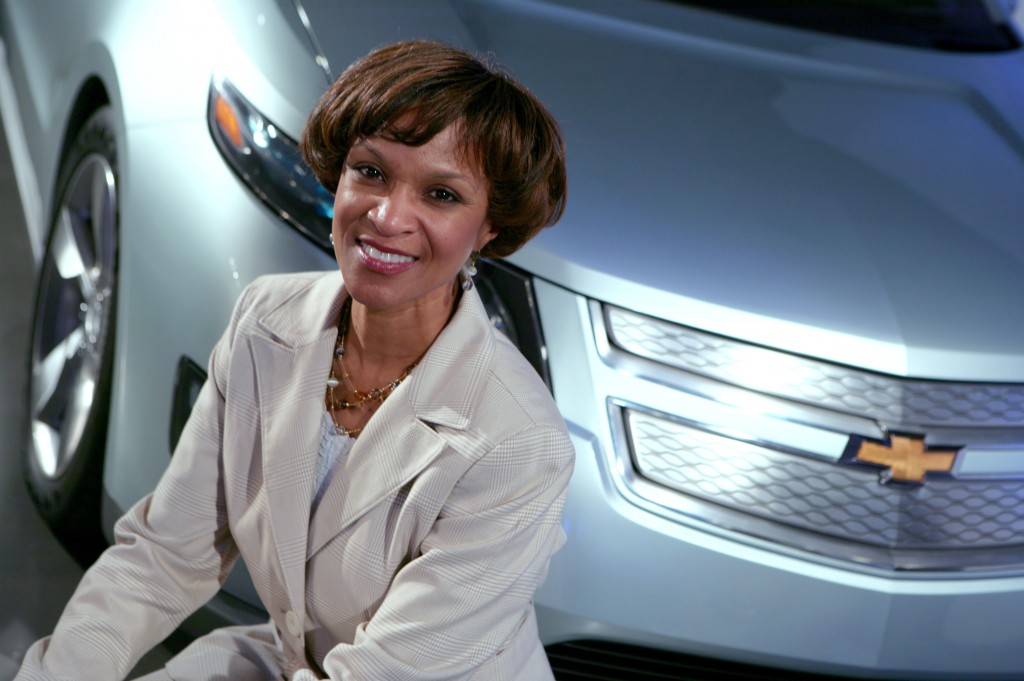 Denise Gray, Director of global battery systems engineering and 30 year GM veteran, has announced that she will leave The General for a battery startup in California.

Since 2006, Gray oversaw the testing and development of batteries going into plug-in and non plug-in versions of GM hybrids and extended-range electric vehicles (EV). She also worked with battery suppliers in examining how new cell technologies could potentially be used in future production vehicles. It was on Gray’s watch that GM produced its first lithium-ion battery pack for the Chevrolet Volt. Most recently, Gray was the strategic lead for battery development on the Volt.

Gray said that she could not disclose the name of the startup company, but did say that it is in California and that it is still running in stealth mode, so this rules out Better Place and Tesla Motors. She said that she was looking forward to building the start-up’s operation from the ground-up which is in stark contrast to her position at GM – where she focused on a single segment of a massive business. Gray’s last day at GM is today – Friday, March 5, 2010. Click past the break to read more and get the full GM Authority Take!

There were 25 team members when Denise Gray started at the battery systems engineering division. As she gets ready to leave, that number has grown to over 200 – and that’s not including support staff in other departments such as purchasing and sourcing.

Over the past year, Gray split her responsibilities with Ron Jamieson, who has been in charge of power battery development for non-plug-in hybrids while Gray dedicated her time to batteries for plug-in vehicles (read: Volt and Ampera). Jamieson will temporarily take over Gray’s duties until a permanent replacement is found.

Gray said that her decision to leave The General was a difficult one, especially being so close to the launch of the Volt. But since most of the development work on the Volt’s battery pack is complete, she couldn’t pass up the opportunity. From a personal point of view, the move is timed very well for Gray: one of her sons is already attending the University of Michigan while another one is two years away from college. Gray’s husband retired from GM two years ago.

It’s important to point out that we don’t know the exact details behind Gray’s departure (we did get a few tips, though). It could be that she wanted to start at a new and exciting job, although after being with GM for 30 years, one could only imagine the hefty retirement package she is leaving behind. On the other hand, GM has been offering certain management some very handsome buyout packages, so it’s still very possible that she accepted one of these offers. However, such deals often come with terms, most notably a non-compete clause where the employee in question isn’t able to seek employment with a competitor for a specified amount of time. Since the battery start-up will most likely be considered a competitor, this makes us think that Gray’s decision to leave was purely her own rather than being gently pushed out the door.

Does The General Have A Brain Drain Problem?

It’s no secret that after taking bailout funds from the U.S. government, GM executives are hamstrung by pay limits imposed by pay czar Kenneth Feinberg (and company). This greatly diminishes The General’s overall attractiveness as an employer and poses a big problem: without having the ability to recruit (and retain) top talent both within and outside the company, highly-valuable employees will leave by the boatloads. The only trick GM can promise current employees and future candidates is first dibs on its impending IPO, which may or may not prove to be financially appealing (you know, due to lack of confidence in GM by the American people). The General is currently trying to rectify this problem by delivering class-leading products, coupled with great advertising, and social media efforts. However, Gray’s departure may be representative of the brain drain that’s currently pillaging GM’s ranks.

The talent exodus is not limited to GM, as problems are rampant around the Detroit locale, with unemployment in the Detroit Metro area approaching 30 percent. On top of that, more than 50 percent of Michigan graduates leave the state immediately after graduation while 25 percent of young professionals plan to leave Detroit within two years of securing employment.

Governor Jennifer Granholm has gone to great lengths to curb the talent flight. Last year, the legislature passed $300 million in tax credits in an effort to attract advanced battery firms to the Detroit Metro area. The effort has seen some success, as big names like A123Systems and Johnson Control have come into the area. Other companies, however, aren’t sold. Fisker Automotive, maker of the Karma luxury plug-in car, shut down its operations in the Detroit area early in February and has instead chosen Delaware to open its first major manufacturing plant.

A recurring theme in H. John Bernardin’s Human Resource Management book is High Performance Work Systems (HPWS), a concept that establishes a positive relationship between good human resources and an organization’s positive financial performance. It seems that The General is having trouble establishing any kid of HPWS in which retaining valuable employees is a must. This is a problem.

Moreover, Denise Gray must have received an offer at said startup that would have eclipsed that of her retirement package at GM (whenever that time may have come). So for the sake of GM, we’re hopeful that our favorite automaker can get out of its transitory period (where it isn’t able to offer competitive compensation packages to current and potential employees) sooner rather than later. Of course, the timeframe for this goal depends largely on how soon GM can turn a profit on a global scale (Europe included). If GM doesn’t fix this and do it quick, it will have a double-pronged problem on its hands. For one, it would have lost very many talented and valuable employees to competitors, and – two – these competitors would engineer, manufacture, and market much better products. The snowball effect gets larger and larger as time goes on, leaving GM in a state of not being able to offer competitive products because of lack of people power.

As for the brain drain epidemic going through Detroit… as the saying goes – once you’re on a roll, everything tends to fall into place. To us, this means that as GM (and Ford) becomes more successful, so will its surrounding geographic environment. Now, why is that Cruze and all-new Impala taking so franking long to bring to market?