As expected, GM announced a restructured North American organization with a flurry of key leadership changes across core North American brands, including Chevrolet, Cadillac, and Buick-GMC.

GM North America (GMNA) is moving away from a combined sales and marketing organization to one that “enables the company to engage experts in each respective role.” That’s code for matching more qualified personnel with jobs that require more expertise. GM is adopting a flatter structure where accountability is key.

It’s become extremely clear to me since taking this role that there is a better way to structure this organization. The premise of the structure is simple — a clearer marketing focus to sell more vehicles, and freeing our sales and service experts to focus on customers and dealers.

That’s an indirect reference to Susan Docherty, who has been relieved of sales and support responsibilities, but remains in charge of marketing. All changes are effective immediately. Reuss went on to say that:

In order to be successful in North America, we need the right mix of product, people and structure. We’ve worked with a small group of executives to align this model and appoint the best candidates for each job.

GM is placing great emphasis on its hope that these changes will lead to an increased focus on the customer, as it places responsibility directly on the executives in charge. We’ve been hearing reports for some time that CEO Ed Whitacre is a big proponent of placing increased responsibility on more employees.

Click past the break to see the revised organization structure.Mark Reuss – GM North America President. Reporting to Reuss are:

Of note, Bryan Nesbitt is leaving Cadillac and “returning to his home organization as executive director, advanced concept group.” He will report to Ed Welburn, Vice President, Global Design.

Steve Carlisle – VP U.S. sales operations is responsible for dealer network retail sales support and fleet and commercial. Carlisle was most recently executive director, GM South East Asia Operations and President and Managing Director, GM Thailand. He will be replaced by Martin Apfel, who will report to Tim Lee – President of GM International Operations. Reporting to Carlisle are:

According to Mark Reuss:

This structure has been developed with as few layers as possible between me, the dealer and the customer. By removing layers and giving leaders increased accountability, we allow them to move faster and focus on what needs to be done.

The following executives continue in their current positions:

GM also noted that the North American team is supported with executives from key functions including human resources, legal, information technology, and communications.

Reuss concluded by saying that:

This is my team. Leaders with exceptional talent from around the world, combined with strategic thinking from outside. They are the right team for GM North America now, hand-picked and put in place to win.

This is great news for GM and its fans. Placing greater direct responsibility on executives is bound to lead to better results in sales and marketing. Can we ask why this wasn’t done, say, ten years ago? Afterall, personell planning was an MBA pillar for how long? Here’s the org chart in living and breathing color! 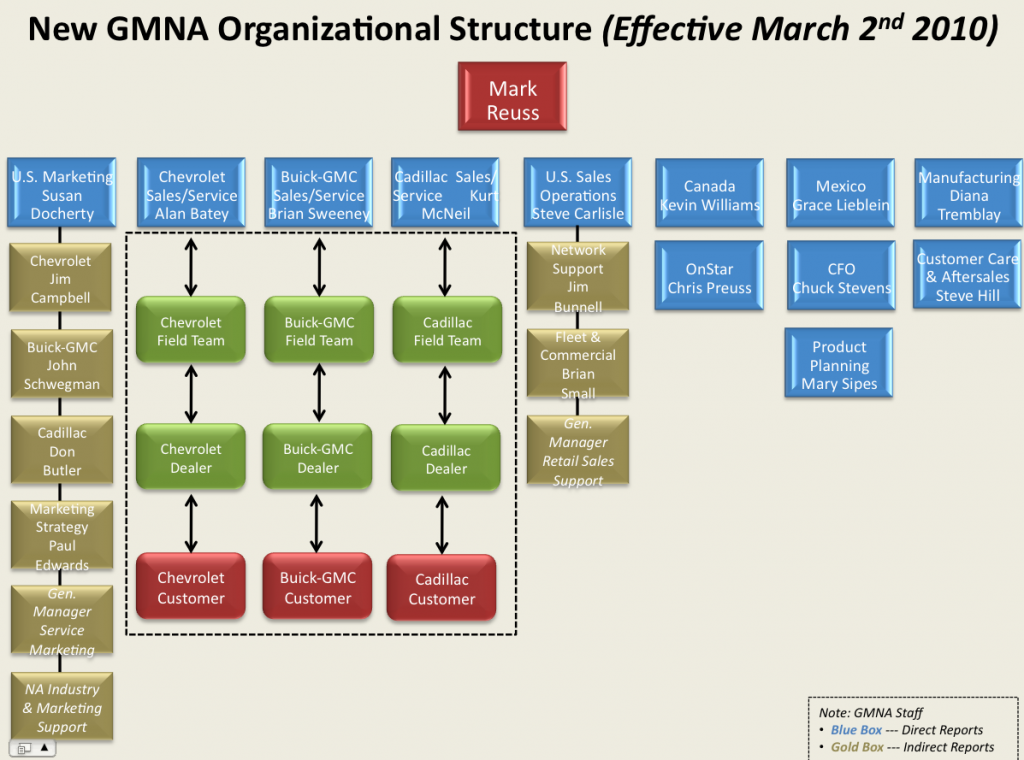