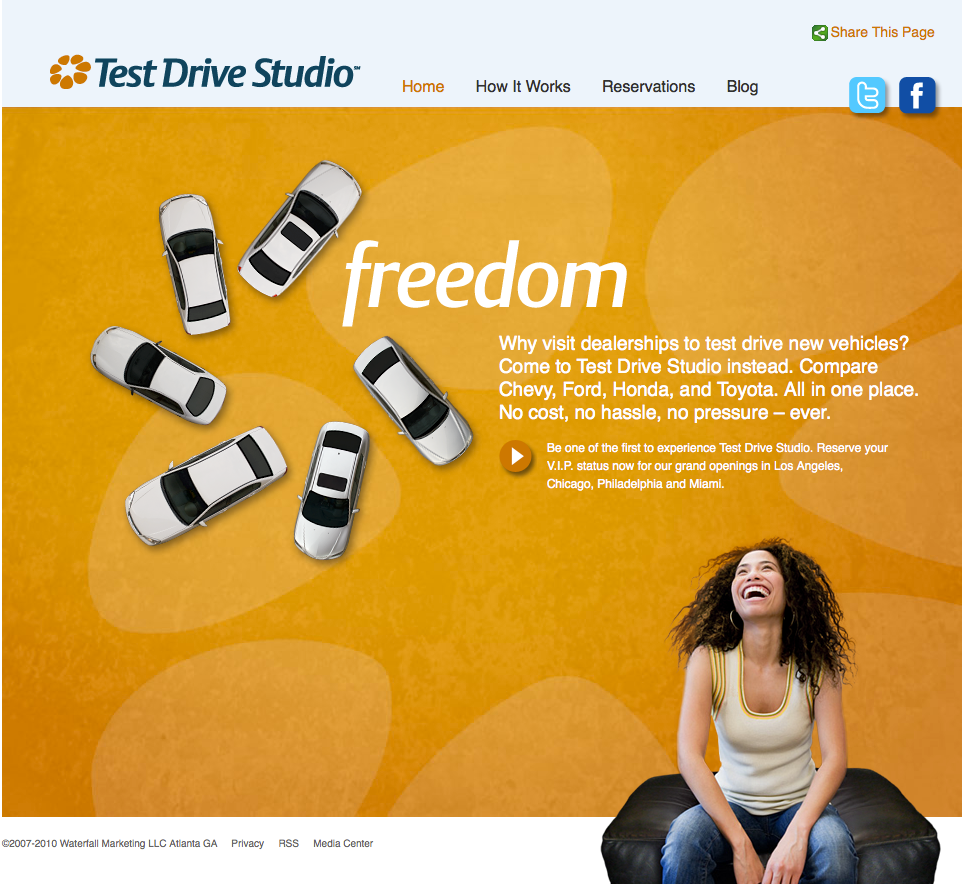 Last week we reported on Chevrolet’s plans for an innovative extension of its May The Best Car Win program called Test Drive Studio (our initial coverage here). In a nutshell, the Studio will deliver information and test drives of Chevrolet models against vehicles from competing manufacturers (Honda, Toyota, Ford), all in a non-pressure-filled environment (read: not a dealership). We’re glad to report that Test Drive Studio is now one step closer to its grand opening, having just launched a brand new website (located here).

The site has a very clean design that delivers on the initial promise of the Test Drive Studio concept, which is to hide the relationship to Chevrolet and/or GM. Not only is the Studio website completely unbranded, the footer doesn’t even contain copyright and/or contact information attributable to The General or Chevy!

The website contains information about how the Studios work, a blog, and a (VIP) Reservations page.

The VIP registration is interesting. Located on the Test Drive Studio’s Reservations page, it contains a form that is preceded by the following text:

Early responses have been overwhelming so reserve your V.I.P. status now and we’ll make sure you are among the first to gain access to our online reservation system when it launches.

In order to participate, you will need to be at least 21 years of age, have a valid driver’s license and show proof of insurance.

We filled out the form and hope we are on the VIP list for the Miami Studio. Speaking of locations…

Upon publishing our original report, we were told that the first four locations of the Test Drive Studios will be in Los Angeles, Chicago, Philadelphia, and Miami, with more locations to follow. However, upon exploring the newly-launched Test Drive Studio website, we discovered the following:

Test Drive Studio is gearing up for your ultimate test drive experience. We open first in Los Angeles, with Chicago, Philadelphia and Miami following closely.

So it looks like LA is first on the list. Not to worry, we’ll post an update as soon as we find out the launch schedule the Chicago, Philly, and Miami Studios.

Lastly, Test Drive Studio has opened accounts on social media services Facebook and Twitter. We should, however, make it clear that opening such accounts is easy; the difficult challenging part is utilizing them on a consistent basis while delivering value to fans and/or followers. In any event, it looks like GM is moving quickly with the Test Drive Studio program and yours truly can’t wait to attend the Miami facility as soon as it’s open! Here’s to hoping we can get first dibs!