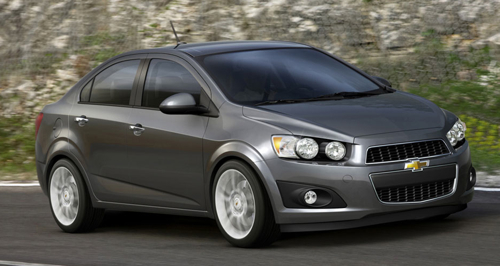 GM wowed many a car enthusiast (us included) when it first unveiled the Chevy Aveo RS Concept at the Detroit Auto Show. And just a few days ago, we were lucky enough to see some of the first official digitized pictures of the Aveo sedan. As the Geneva Motor Show gets underway this coming week, Swiss residents will have the pleasure of getting a hand-on look at Chevy’s mighty compact. But as good a product as the new Aveo may (seem to) be, its success in the marketplace hinges mostly on marketing as opposed to the product itself.

Let’s contrast Chevy’s situation with the Aveo to Ford’s Fiesta – two direct competitors in the subcompact segment. Up until 2010, Ford didn’t have a subcompact in the U.S. market. As such, American consumers have no associations or pre-existing opinions about the Fiesta name (unless, of course, they’ve visited Europe). Now contrast that to the Chevrolet Aveo, a vehicle that has been sold in the U.S. for the last seven years. Needless to say, the present-day Aveo has (and to this day continues to be) the least-competitive offering in its class. To that end, the public already has a certain image of the Aveo ingrained in its head.
I would be willing to bet (cold hard cash) upon hearing the words Chevrolet Aveo, the average car buyer thinks something along the lines of cheap, ugly, plastic, econobox. Obviously, these are characteristics no automaker would want to associate with their product.
So as Ford brings an all-new nameplate to the U.S. with the Fiesta, Chevy is using an already-existing name, one that carries a negative vibe among current and potential clientele.
Basic Marketing
By using an already-existing (and already-tainted) name, Chevrolet will need to change perceptions. Anyone who has taken an introductory course in marketing understands that changing perceptions is the most difficult task faced by any marketing maven. Simply put, it’s much easier to introduce and promote a new name than to change perceptions about an already-existing one.
Granted, launching a new name may be an expensive endeavor, but it could prove to be even more costly to change people’s impressions of an already-existing one. If John Doe thinks that the Aveo is a cheap piece of crap, it would be difficult to tell him otherwise.
Realizing this, Ford decided to use an all-new name on its forthcoming subcompact – and to never look back.

Perhaps All Is Not How It Seems

After taking all this in, I’ve come to the following realization: since Chevrolet decided to continue using the Aveo name, perhaps the moniker doesn’t actually carry that negative of a reputation afterall. If anyone had this kind of data (and information), it would be Chevrolet!
Nevertheless, the success of the all-new Aveo will hinge on marketing more than anything else.