Over the last year, the GMC brand has been nothing short of a hot-button topic among GM fans. After exiting bankruptcy, many wondered why The General decided to keep GMC over Pontiac and Saturn. As we later found out, GMC is a very profitable brand for General Motors – something the automaker wouldn’t want to send to the automotive graveyard (to join Pontiac, Saturn, and Oldsmobile) for obvious reasons.

Shortly after that, GMC released the Terrain, followed by the Granite Concept, and the GM enthusiast community became a bit intrigued, if not confused. After gathering up all the bolts in a single jar, I believe I’ve figured out the purpose of the GMC brand now, and into the future. Before we get there, however, let’s briefly go over GMC’s most recent history.

GMC is a very old brand with a long history. It has built coach buses, specialty war vehicles, and even motor homes. But let’s set our time machine back to the late 1960s and early 1970s, when Buick, Pontiac, and Oldsmobile vehicles shared retail floor space. It just so happened that dealers of these three GM brands – only one of which has survived to this day – didn’t have a pickup truck to sell. One option was to allow these dealers to sell Chevy trucks. But to dealerships already selling three brands this wasn’t an option, as Chevy’s lineup had more models than the entire model range of Buick, Pontiac, and Olds combined. Moreover, doubling showroom space for the addition of a full-line brand such as Chevy was cost prohibitive for dealers. And that’s how the “new” GMC was born – an exclusive truck brand for Buick, Pontiac, and Oldsmobile dealers. In essence, the GMC as we know it today came into fruition to market Chevy trucks and SUVs to Buick, Pontiac, and Olds customers under the GMC brand name.

For example, the GMC Terrain is a vehicle that is as far away from “professional grade” as a pink Honda DelSol. The Terrain, a compact family CUV, shares most mechanical bits with the Chevy Equinox, all while wearing a different top hat (body). The same goes for the GMC Acadia – which wears different sheet metal than its mechanically-identical brother, the Chevy Traverse.What these two GMC CUVs have going for them is their substantial difference in appearance relative to their Chevy counterparts. What’s more, both the Terrain and Acadia are examples of platform sharing done right better than GM is known for (take a look at the pictures below.) 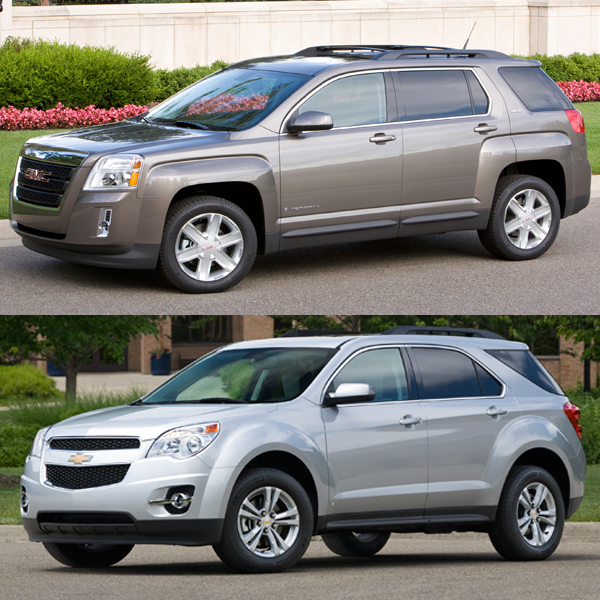 GMC Terrain (top) and Chevy Equinox (bottom) share the Theta platform, but do so in the best way possible!

The Rest Of The Line-Up

So that leaves us with the rest of the GMC line-up – the Canyon, Sierra and Sierra HD pickups as well as the Yukon and Yukon XL SUVs. Barring some badges, grilles, bumpers, and lights, it’s obvious that these vehicles are very much the same as their Chevrolet siblings, the Colorado, Silverado, and Tahoe/Suburban, respectively. It goes without saying that GM didn’t go far enough to differentiate these vehicles from their Chevrolet twins. 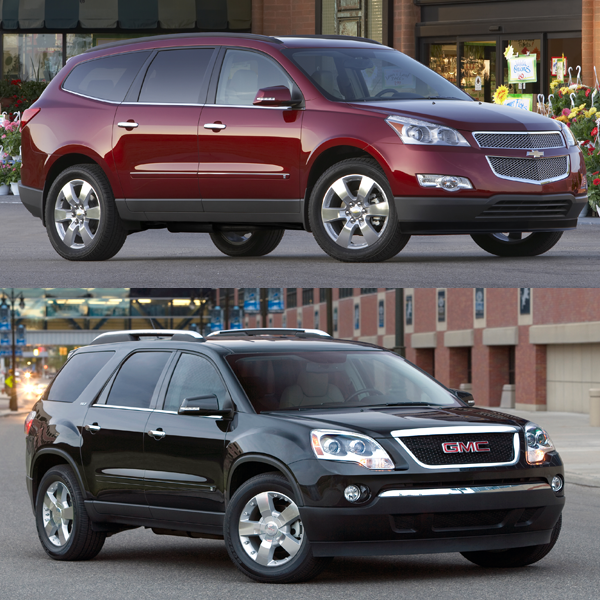 Chevy Traverse (top) and GMC Acadia (bottom) share the Lambda platform, but one wouldn't be able to tell with a naked eye

Let’s come back to my earlier statement that GMC is a brand that was built on marketing rather than product (a marketing exercise, if you will). The “professional grade” image is actually GMC’s ultimate initial product differentiator, as everything the line-up offers is available in similarly-equipped Chevrolets for nearly the same price!

Here’s an example: some brands (and models) are built on the product differentiation principle. Take the Chevy Volt, a vehicle that’s so unique that it has no competition. GMC, on the other hand, is a brand that uses image-based distinctness. And there is absolutely nothing wrong with that, so long as it doesn’t hurt other GM brands in the long run.

That said, GMC’s “professional grade” image is something many find admirable and appealing (from an image standpoint). And this image may attract a different customer than your average Chevy buyer. So what started as a way to meet dealer needs morphed into a brand that may attract a buyer that would otherwise not even consider looking at a Chevrolet product, let alone purchasing it. This buyer, however, may be attracted to GMC’s brand image.

Since the 1970s, GMC has diversified (from being purely a truck and SUV brand) into CUVs – with the aforementioned Acadia and Terrain. The Granite Concept brings GMC even further away from its truck roots, but we’ll get to that one in a bit.

So here is what I believe is General Motors’ strategy for the GMC brand going forward:

In fact, this tough design language can even command a slight-medium price premium over the mainstream Chevrolet brand, yet still fit in below GM’s premium Buick and Cadillac marquees. After all, being slightly premium is what makes GMC so profitable.

Looking at the rest of The General’s line, Buick is refined luxury (along the lines of Lexus), while Cadillac is performance plus luxury (RWD, V-series models).

What General Motors gains from its strategy with GMC is very interesting. Most, if not all, of GMC’s vehicles share the majority of their mechanical bits with Chevrolet cars and trucks. However, the new GMC is a perfect example of platform sharing done right. Gone are the days of badge engineering, let’s welcome the days of platform sharing – using different top hats to achieve a significantly different look on the same vehicle architecture. Perfect examples of proper platform sharing are the GMC Acadia (Lambda platform shared by Chevy Traverse, Buick Enclave) and Terrain (Theta platform shared by Chevy Equinox, Cadillac SRX). In fact, the only GMC products still stuck in the badge-engineering era are the Yukon/XL (GMT900 platform – Chevy Tahoe/Suburban) and Sierra/HD (Silverado/HD).

What we’re left with are very desirable results for The General:

I think it’s fair to say that the GMC Granite Concept doesn’t/wouldn’t fit the GMC brand image at all. Let’s leave it at that for now. In case you would like to hear the exact reasons why I think this is the case, check out the GM Authority Debate podcast episode 2 – where we debated this very topic until we were sick of even hearing the name “Granite.”

In the end, GMC should continue on its path of selling tough trucks, SUVs, and CUVs at a slight premium, attracting those customers who want to look like they’re driving a proverbial tank as opposed to a sleek torpedo (Chevy). As it currently stands, there is a market for these vehicles in North America, and perhaps all over the world in the future. Personally, if I were in the market for a small mainstream (read: non-premium) CUV, I would buy the Terrain over the Equinox without a second thought!

What do you think of this strategy? Do you agree with my vision? Talk to me in the comments!