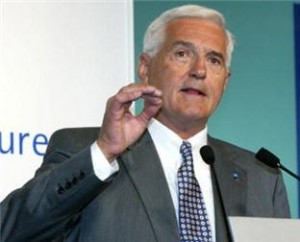 Speaking at the annual National Automobiles Dealers Association (NADA), Bob Lutz declared his belief that the top 25 executives at General Motors are underpaid. Because GM is one of the companies that received billions in federal bailout money, Treasury officials are reviewing the company’s executive pay packages. It is probably not a coincidence then that Lutz chose this time to make his remarks regarding the matter of executive pay.

While Lutz does think that the 25 executives at GM deserve more compensation because of “the rigors of the job and demands and the accountability,” it is important to note that his exact quote says that the executives “are being paid way, way, way below market.” The distinction here is that Lutz is pointing out that they are being paid below market and not simply that they are underpaid. He even acknowledges that a company such as GM, which has recently emerged from chapter 11 bankrupcty, can not expect to have the same levels of executive compensation as similar companies that have not been through the grim process.

Lutz went on to point out the problem that a company paying below market value is going to have trouble keeping and recruiting executives. Needless to say, when another company is willing (and able) to pay more for a similar job, most executives will gladly take the job with the higher-paying company. Unfortunately, GM needs talent that it can barely afford right now.

Lutz also acknowledged key operational challenges faced by GM, such as having enough of the right vehicles at the right time without the burden of excess inventory. To solve these problems, GM needs the talent of great executives, something that requires high levels compensation as it is offered by competitors.

Overall, Lutz conceded that the pay cuts are understandable given the automaker’s situation and that he is looking forward to the end of this situation. The pay cuts will end as soon as GM finishes paying back government loans.

CEO Ed Whitacre has previously stated that the company will finish paying back the loans during 2010. Obviously, Lutz and his fellow executives are looking forward to this time.