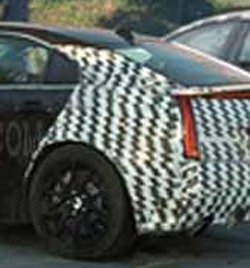 We’ll admit it right out of the gate – we’re not sure whether this Cadillac mule is of the ATS or the Converj, or even whether it’s a Cadillac in the first place. But we’d be more than happy to share our opinion with you.

To start things off, all signs lead to this prototype vehicle wearing a Cadillac badge in its final incarnation. The vertical lights and horizontal stop lamp/spoiler are tell-tale signs of Caddy’s Art and Science design DNA. After that, things become a bit shaky, since this mule’s trunk lid looks way too short to be the upcoming ATS sedan. In this modest blogger’s opinion, the design of the ATS shouldn’t deviate too much from the iconic three-box profile of its most direct would-be competitors such as the BMW 3-series, Lexus IS, and Audi A4. Keeping this mind, if the mule is not the ATS sedan, then it may be a variant – an ATS notchback/sportback similar to the recently unveiled Audi A5 Sportback. If this is indeed the case, then Cadillac would be ahead of rival manufacturers (Lexus, Acura, Infiniti, Mercedes) in making a compact sedan in notchback form. Let’s just hope that it will be accompanied by a traditional sedan at launch.

If, however, the prototype in question is not the ATS, then the only thing the minds here at GM Authority can think of is the production-approved Converj PHEV. In our opinion, the Volt-based plug-in hybrid can take any shape, be it sedan, notchback, or otherwise. Our reasoning is that since the Converj is a unique vehicle (read: it has no direct competition), the Cadillac crew can experiment with its design to its heart’s content. However, the highly-acclaimed Converj concept had only two doors while this here prototype has four (plus a trunk). Perhaps Cadillac decided that adding another set of doors would attract more prospective buyers than a two-door coupe. If that’s the case, then it would seem that the Converj has several specialized luxury hybrids such as the Lexus HS250h in its crosshairs.

So what do you think this mysterious mule is? Let us know in the comments!