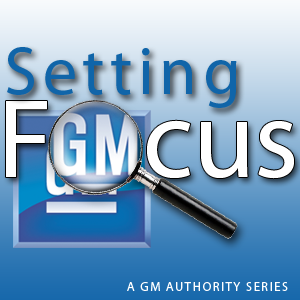 This post is part of the Setting Focus series where we outline the steps GM needs to take to become a leader in the automotive space once again. This is a place where criticism and praise can – finally – stand side-by-side.

When Bob Lutz speaks, he says things people don’t want to hear. But he says them anyways; he says everything. And after he speaks… GM’s PR decides whether he’s right or not (and whether to subsequently do damage control). This is what domestic automakers need: someone who says something no one wants to hear.

Bob recently endorsed incrementally increasing the gas tax. Tomorrow he might change his mind, but acknowledging what automakers need to be successful is the first step of recovery towards prosperity. Short-term thinking and yesterday’s business practices mean GM would not be in business if it weren’t for bankruptcy (and TARP funds). Luckily, most of GM is still kicking. And while size was arguably a factor working against the old GM, there is still potential for regrowth. This potential can only be realized through advanced enterprising with long-term plans.

For GM, today’s profits are second to sustainability and growth. In contrast, GM’s GMT-800 vehicles made huge profits but were barely sustainable. While I support making money in any way possible, it is important to avoid losing focus. These full-sizers were some of the only competitive vehicles from GM for a long number of years. Many argue that GM should have seen fuel crises coming: why wait for the apocalypse? Why even prepare for it? The bottom line is that if (that’s a big IF) GM had a full lineup that was as desirable as its full size GMT-800s, The General wouldn’t have faced the problems it did when fuel prices skyrocketed.

Shortsightedness is a problem, but narrow-mindedness in the now is even more troublesome. Yet not all is lost, as GM is starting to solve this problem. Creating desirable, specialized product without trying to be all things to all people makes the New GM that much stronger, transforming it into an automaker that is resistant (but not impervious) to market fluctuation. For example, many automakers shared in the SUV boom but resisted the massive sales slump which plagued General Motors by having a widely-accepted, diverse lineup.

Ironically the GMT-900s were some of the first vehicles to be replaced in the latest product cycle. Now that the GMTs are in their fourth model year, the product cycle has finally reached the smallest GM cars. Once the first desirable Delta 2 (Cruze and Orlando) and Gamma 2 (Aveo, Spark) vehicles hit the market, Chevrolet will be competitive in every segment. GM has finally acknowledged what it did not want to hear itself for a long time: the reality. This ultimately means that it does not suffer from narrow-minded reliance.

Moreover, GM needs to increase its focus on individual brands. Each brand needs differentiated vehicles and purposeful marketing. The most successful car companies have specifically and thoroughly defined brand identities that are very well-established.

The most successful automakers in the world, including Porsche, BMW, Mercedes, and Toyota, all have well-established brand identities that consumers are well aware of. Mercedes is the second most recognized brand world-wide! GM needs to inject its brands with marketing that creates consumer awareness and specific associations with each brand. But it can’t do so without the product to back it up: what good is the best marketing when the product falls flat on its face?

That said, GM is on the right track with brand taglines. Buick’s “The New Class of World Class,” and Cadillac’s “Life, Liberty, and the Pursuit” come to mind. Older lines such as “Like a Rock” and even “Professional Grade” work well but need the Granite product to support their theme. The taglines also need the acceptance and awareness which BMW’s “The Ultimate Driving Machine” has achieved – a process that takes time (and money).

Coinciding with the launch of the successful Enclave, Buick launched “Drive Beautiful.” Luckily “Drive Beautiful” lasted mere months because it implies the only strength was Buick’s styling. Going forward, GM’s new brand taglines need to be more than good: they need to be timeless. This is the only problem with “The New Class of World Class.” It can only be new for so long.

A great company is great again because of its continued focus on product – the reality of its business. After all, product is what made it successful in the first place. By continuing to focus more on individual marketing efforts and independent brand missions, General Motors can realize the success which began when Chevrolet adopted the “American Revolution” tagline.