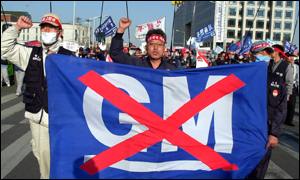 Some disgruntled U.S. residents are getting together to reenact one of the oldest modern-business traditions – a good ol’ protest against the duck-shootin’ government. The picket line will meet on Monday, January 11 (2010) at GM’s Ren Cen HQ between the hours of 9:30 AM and noon to protest the government’s 61 percent ownership of General Motors. The protest will coincide with the beginning of the Detroit Auto Show, where approximately 6,000 journalists and government officials will be present.

According to The Detroit News, organizers of the Tea Party want to “make a peaceful yet clear statement against government takeover of America.” And an online flier states “What Michigan needs is a responsible auto industry that can become profitable, self sustainable and efficient in ways that provide more private jobs and economic success.”

While this humble blogger completely agrees with the latter sentiment – the U.S. auto industry needs to become profitable, self-sustainable, and efficient – what’s not clear is the need to protest that what is already being done. GM is well underway in achieving the demands of the protestors, making significant strides to reduce costs and dramatically improve its product portfolio, both of which will make it self-sustainable. Whether the picketers understand this is unclear at this point.

As for the “government takeover of America” bit, all I will say is that if this country (and the picket line) desires a U.S. auto industry, it needs to comprehend that government involvement was a necessary part of delivering that desire. Without it, neither GM nor Chrysler would exist. I’m not sure whether one company (Ford) counts as an “industry.” That said, it’s obvious that the current levels of government involvement are temporary, with GM having begun to repay its loans to the Fed.

It’s curious why protest organizers decided not to meet at Cobo Hall, the location of the Detroit Auto Show. That way, they would definitely be able to garner a lot more attention from the attending press. Perhaps they should redirect the focus of their efforts to protest the purchase of inferior import vehicles by their neighbors…